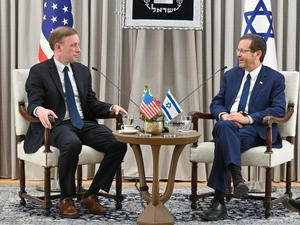 Saudi Arabia will not normalize ties with Israel in the absence of a two-state solution with the Palestinians, the kingdom's top diplomat has said, according to a tweet by the foreign ministry on Friday.

"True normalization and true stability will only come through... giving the Palestinians a state," Prince Faisal told Bloomberg at the summit.

Saudi Arabia, the world's largest oil exporter, is a close partner of the United States but it has repeatedly refused to normalize ties with U.S.-ally Israel due to its occupation of Palestinian territories.

Netanyahu has repeatedly expressed his desire to see Saudi Arabia join the list.

In their talks on Thursday, Netanyahu and Sullivan discussed "measures to deepen the Abraham Accords... with an emphasis on a breakthrough with Saudi," the Israeli leader's office said.

The West Bank and the Gaza Strip plus Israeli-annexed east Jerusalem were long touted as the basis of a Palestinian state in a "two-state" solution to the long-running conflict.

But that goal has become ever more distant, with the occupied West Bank fragmented by Jewish settlements.

Netanyahu plans to pursue a policy of increased settlement expansion in the West Bank, with ultra-Orthodox Jewish parties in his coalition advocating the annexation of some of the territory.

KSA naturally feels, said its spokeswoman, that things would much more stable and secure if Palestinians were safely locked up somewhere.

ISIS = KSA? Nonsense, Abu Baqr Al Baghdadi was groomed in Abu Ghraib prison, Iraq under CIA supervision…. They used the US arsenal to terrorize the Middle East… and 18 months ago, Washington reiterated this with the Taliban leaving them an arsenal worth between 30 and 80 billion dollars. KSA is distancing itself from the US, they’re actively seeking to join the BRICS. Good for them.