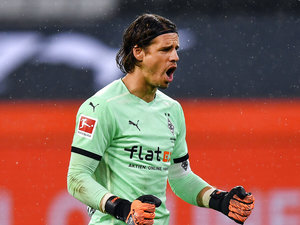 The 34-year-old Sommer signed a deal through June 2025, Bayern said on Thursday. Sommer arrived in Munich on Wednesday for a medical examination and trained with his new teammates on Thursday before Bayern announced the transfer.

Bayern was left scrambling for cover after Neuer broke his leg in a skiing accident last month. The 36-year-old Germany goalkeeper is out for the rest of the season and there were reports his career could be threatened depending on the severity of the injury. Neuer said it was a lower leg fracture.

"We had to react after losing Manuel. We have big goals this season that we want to achieve, and that's why we've recruited Yann Sommer, who we regard as one of the best European goalkeepers," Bayern sporting director Hasan Salihamidžić said. "Yann is the long-time Swiss national team goalkeeper, has Champions League experience, is a ball-playing goalkeeper, and fits into our team very well with his ambition and his character."

Bayern was reportedly paying 8 million euros ($8.6 million) for Gladbach to let its No. 1 goalkeeper leave in the middle of the season. Sommer's contract with Gladbach was due to expire at the end of the season, when the club risked losing him then without receiving a transfer fee.

Sommer played a role in helping Gladbach stay unbeaten against Bayern in their last four meetings.

Sommer is unlikely to want a backup role at Bayern when, or if, Neuer returns. Sommer played 272 Bundesliga games for Gladbach since joining from Basel in 2014, as well as 21 in the German Cup, 34 in the Champions League and 38 in the Europa League. He won the Swiss championship four times with Basel but went without any titles at Gladbach.

That should change at Bundesliga leader Bayern, which is going for a record-extending 11th consecutive title.

"He has everything required to contribute immediately to our success," Bayern CEO Oliver Kahn said.

Sommer has played 80 times for Switzerland, most recently at the World Cup, where the team's hopes were ended in the round of 16 after losing to Portugal 6-1.