'This is nothing': Ronaldo v Messi just the start for Saudis 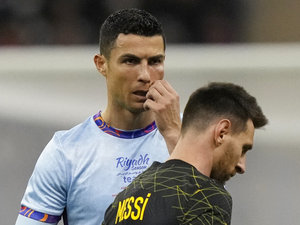 A showdown between two of the world's greatest footballers provided an entertaining spectacle in Riyadh but deep-pocketed Saudi Arabia will not stop there in its drive to burnish its image through sport.

The friendly had all the trimmings of a major fixture, complete with VAR, flame-throwers, tickertape and a medal presentation in front of more than 60,000 fans at the venerable King Fahd Stadium.

But the desert kingdom is already promising more with a World Cup and Summer Olympics, perhaps even a Winter Olympics, already in its sights, together with a swathe of other major events.

"This is a big match but... this is nothing (compared to) what will happen with Vision 2030," said Turki Al Sheikh, head of the General Entertainment Authority, referring to Saudi Arabia's ambitious development plan.

Just five years after allowing its first non-Muslim tourists and letting women drive, Saudi Arabia is attempting to open up its conservative, long-cloistered society to the world.

The world's biggest oil exporter has thrown hundreds of millions at sports deals including Ronaldo's capture, F1 in Jeddah and the lucrative LIV Golf tour, drawing frequent claims it is "sportswashing" its human rights record.

In coming years the Saudis, who watched as neighbors Qatar hosted the World Cup in November and December, will hold the men's and women's Asian Cup, the Olympic-sized Asian Games and even the Asian Winter Games on artificial snow.

It is all part of grand plans by the de facto ruler, Crown Prince Mohammed bin Salman, to modernize the Saudi economy and remove its reliance on oil before the world moves on to other fuels.

"My leader will surprise Saudis with much more things," Al Sheikh told AFP, referring to the crown prince.

"We are ready to fulfill his demands at any time. But what's coming is much greater."

Saudi Arabia is discussing a joint bid for the 2030 World Cup with Egypt and Greece, while last year its sports minister told AFP that hosting the Olympics was the "ultimate goal".

Its biggest coup so far was Ronaldo's signing by Al Nassr for more than 200 million euros, plus a separate 200 million deal to promote the World Cup bid, according to a source close to the club.

The shock transfer of the 37-year-old Portuguese has triggered speculation that Messi, who plays for Qatar-owned PSG but is a paid Saudi tourism ambassador, could join him in the Pro League.

"Regardless of whether Messi will go to Saudi, we will see more superstars moving to Saudi Arabia."

Reiche said the "global spotlight" would now intensify on issues in Saudi such as women's rights, LGBTQ and migrant workers, as happened to Qatar during the World Cup.

But he insisted that for the Gulf monarchies, high-profile sport is not just an attempt to gloss over human rights problems.

"In Saudi Arabia, it's part of a wider approach of opening up society rather than distracting from human rights violations," Reiche said.

"They recognize they can't rely on military and political power, they have to have soft power," he added, saying Thursday's game sent a "very strong message".

"This is something that is noticed in the entire world. By having such a game, it's also like 'look how we're changing'."