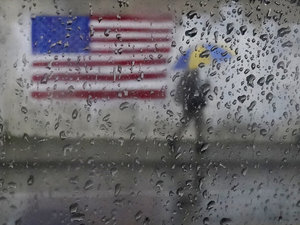 As damaging as it was for more than 32 trillion gallons of rain and snow to fall on California since Christmas, a worst-case global warming scenario could juice up similar future downpours by one-third by the middle of this century, a new study says.

The strongest of California's storms from atmospheric rivers, long and wide plumes of moisture that form over an ocean and flow through the sky over land, would probably get an overall 34% increase in total precipitation, or another 11 trillion gallons more than just fell. That's because the rain and snow is likely to be 22% more concentrated at its peak in places that get really doused, and to fall over a considerably larger area if fossil fuel emissions grow uncontrolled, according to a new study in Thursday's journal Nature Climate Change.

The entire western United States would likely see a 31% increase in precipitation from these worst of the worst storms in a souped-up warming world because of more intense and widely spread rainfall, the study said.

Scientists say the worst-case scenario, which is about 4.4 degrees Celsius (7.9 degrees Fahrenheit) of warming since pre-industrial times, looks a bit more unlikely since efforts are being undertaken to rein in emissions. If countries do as they promise, temperatures are on track to warm about 2.7 degrees Celsius (4.9 degrees Fahrenheit), according to Climate Action Tracker.

The National Weather Service calculated that California averaged 11.47 inches of precipitation statewide from Dec. 26 to Jan. 17 — including 18.33 inches in Oakland and 47.74 inches in one spot 235 miles north of San Francisco — because of a series of nine devastating atmospheric rivers that caused power outages, flooding, levee breaks, washouts and landslides. At least 20 people died.

"It could be even worse," said study author Ruby Leung, a climate scientist at the U.S. Pacific Northwest National Lab. "We need to start planning how would we be able to deal with this."

Leung used regional scale computer simulations to predict what the worst of the western winter storms will be like between 2040 and 2070 in a scenario where carbon emissions have run amok. She looked at total precipitation, how concentrated peak raining and snowing would be and the area that gets hit. All three factors grow for the West in general. California is predicted to get the highest increase in peak precipitation, while the Southwest is likely to see more rain because of a big jump in area of rainfall. The Pacific Northwest would see the least juicing of the three areas.

Overall precipitation is a bit lessened from adding all the factors, because just as the peak rainfall grows the rainfall on the edges of the storms is predicted to weaken, according to the study.

There are two types of storms that Leung said she worries about: Flash floods from intense rain concentrated over a small area and slower, larger floods that occur from rain and snow piling up over a large area. Both are bad, but the flash floods cause more damage and hurt people more, she said.

And those flash floods are likely to get worse from what Leung's paper calls a "sharpening" effect that happens in an ever warmer world. That means more rainfall concentrated in the central areas of storms, falling at higher rates per hour, while at the outer edges rainfall is a bit weaker.

This happens because of the physics of rain storms, Leung said.

Not only can the atmosphere hold 4% more moisture per degree Fahrenheit (7% per degree Celsius), but it's what happens in the storm that changes and makes the precipitation come down even more, Leung said. You've got air rising inside the storm with more water vapor condensing to produce rain and snow; it then releases heat "that kind of causes the storm to become more vigorous and stronger," she said.

When water vapor condenses it comes down as rain and snow along the edges of the storm, but heating sort of squeezes that falling precipitation in toward the middle, Leung said.

"The concepts and impacts of how precipitation features are likely to change are well quantified and well explained," said David Gochis, an expert in how water affects the weather at the National Center for Atmospheric Research in Boulder, Colorado, who wasn't part of the study.

When she used computer simulations, Leung chose the most severe worst-case scenario for how the world's carbon emissions will grow. It's a scenario that used to be called business as usual, but the world is no longer on that track. After years of climate negotiations and the growth of renewable fuels the globe is heading to less warming than the worst case, according to climate scientist Zeke Hausfather of the tech company Stripe and Berkeley Earth.

"We are providing more of a worst-case scenario, but understanding that if we do take action to reduce emissions in the future, we could end up better," Leung said. "If we control the emissions and lower the global warming in the future, we can limit the impacts of climate change on the society, particularly flooding and extreme precipitation that we are talking about in this study."