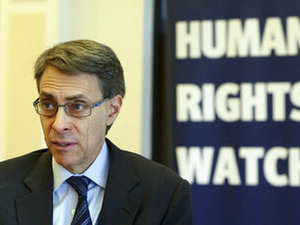 America's prestigious Harvard University has said it would offer a fellowship to a leading human rights advocate after an initial snub over his criticism of Israel sparked a backlash.

The dean of Harvard Kennedy School caused an outcry when it was revealed this month that he had blocked the hiring of long-time former Human Rights Watch (HRW) executive director Kenneth Roth.

Critics said the move went against academic freedoms and raised questions about the limits of free speech regarding US ally Israel and the influence of college donors.

In a letter to staff and students Thursday, Douglas Elmendorf said he had "made an error" and that the school will now "extend an offer to Mr. Roth to serve as a fellow."

"I am sorry that the decision inadvertently cast doubt on the mission of the school and our commitment to open debate in ways I had not intended and do not believe to be true," Elmendorf wrote in the statement, seen by AFP.

The furor erupted when The Nation published an article saying Elmendorf had stopped the school's Carr Center for Human Rights Policy from offering Roth a one-year position last summer.

The magazine quoted a faculty member as saying the explanation Elmendorf gave her was HRW's "anti-Israel bias" and Roth's criticism of the country, including in tweets.

The American Civil Liberties Union called the refusal "profoundly troubling -- from both a human rights and an academic freedom standpoint."

Pen America, a freedom of expression group, said it had raised "serious questions about the credibility of the Harvard program itself."

Roth wrote in the Guardian that he suspected the dean was worried about the "reaction" of Israel-supporting donors although he couldn't prove it.

In his statement, Elmendorf insisted his decision "was not influenced by donors" or made "to limit debate at the Kennedy School about human rights in any country."

Rather his motivation was based on "my evaluation of his potential contributions to the school," Elmendorf said.

Roth, who ran HRW for 29 years before stepping down last August, said in a statement that he was "thrilled" that Elmendorf had changed his mind.

"I look forward to spending time there with colleagues and students," the 67-year-old said.

He added though that he remained worried about academic freedom, noting that his case had received intense coverage because of his three decades at the helm of HRW.

"The problem of people penalized for criticizing Israel is not limited to me, and most scholars and students have no comparable capacity to mobilize public attention," said Roth.

In April 2021, HRW released a report accusing Israel of "crimes of apartheid and persecution" against Palestinians.

Roth's father was a Jewish refugee who fled Nazi Germany.

Colleges and universities are unhealthy environments.

Universities have become hostages of ideologies and state policies.