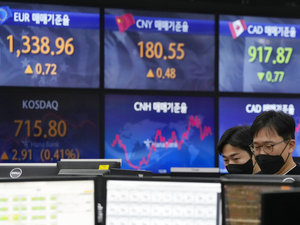 Shares were higher in Europe and Asia on Friday after Wall Street declined on worries that the U.S. economy is headed for recession.

Traders worry the Federal Reserve and central banks in Europe and Asia that have raised interest rates to cool economic activity and inflation that is at multi-decade highs might be willing to tip major economies into recession.

A Fed board member, Lael Brainard, and President Christine Lagarde of the European Central Bank, in separate appearances Thursday, affirmed plans to keep interest rates elevated despite market hopes plans might be scaled back due to indications activity might be cooling.

"That again implies more hikes to come and then a long hiatus, not the imminent reversal markets are pricing for," Rabobank said in a report.

Japan reported that its consumer inflation rate hit 4% in December, its highest level in 41 years. The high reading may add to pressures on the Bank of Japan to alter its longstanding policy of keeping its key interest rate at an ultra-low level of minus 0.1%. But economists expect price pressures to ease in coming months since as inflation elsewhere declines.

On Wall Street, the future for the benchmark S&P 500 index was up 0.2%. That for the Dow Jones Industrial Average was down 0.1%.

Reports have shown weakness in the U.S. housing industry and manufacturing in the mid-Atlantic region, though they weren't as bad as expected and the job market appears healthy. Those followed worse readings than expected Wednesday on retail sales, a cornerstone of the economy, and industrial production.

Forecasters expect a U.S. recession this year but say it likely will be brief.

The Fed's key lending rate is 4.25% to 4.50%, up from close to zero one year ago. Its next rate decision will be announced Feb. 1. Investors expect an increase of 0.25 percentage points, smaller than previous hikes of up to 0.75 percentage points.

In energy markets, benchmark U.S. crude advanced 58 cents to $81.19 per barrel in electronic trading on the New York Mercantile Exchange. Brent crude, the price benchmark for international oil trading, gained 63 cents to $86.79 per barrel in London.