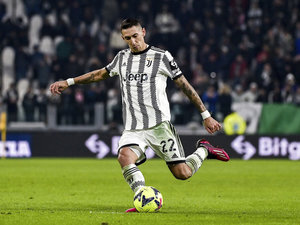 A penalty kick converted. A backheel flick to set up another goal. And an expert touch to start off a successful free kick scheme.

Argentina's World Cup final standout Ángel Di Maria showed off his talents for Juventus in Serie A on Sunday. Still, it wasn't enough to prevent the Bianconeri from being held to a 3-3 draw at home by Atalanta in their first match since being penalized 15 points for false accounting.

Ademola Lookman scored his third consecutive brace for Atalanta, which also got a goal from Joakim Maehle.

Juventus needed an equalizer from Danilo midway through the second half to earn the draw.

The 15-point penalty was handed out during an appeal hearing at the Italian soccer federation Friday, dropping Juventus from third place all the way to the bottom half of the table.

"This is a day that will be certainly remembered forever in the history of Juventus and we have the responsibility to step onto the field and represent this club," Danilo said. "Our objective does not change, we have to win as many games as possible for ourselves, the club and our fans, then we'll see where we are at the end."

The draw moved Juventus up to ninth place, 14 points below the Champions League places.

Lookman put Atalanta ahead early on with a powerful shot that Juventus goalkeeper Wojciech Szczęsny let squirm in.

Di Maria then converted from the spot before his backheel pass set up Nicolò Fagioli to cross for Arkadiusz Milik's volley.

Lookman set up Maehle's goal after Juventus gave the ball away in its own half then headed in his second before Danilo equalized on a set piece as Di Maria rolled it back to him to fire in after Atalanta's wall fell apart.

Lookman has 11 goals this season to sit second on the league scoring chart behind Napoli's Victor Osimhen — his teammate on Nigeria national team — who has 13.

Earlier, Paulo Dybala set up both goals either side of halftime for Roma in a 2-0 win at Spezia. Stephan El Shaarawy scored after a give-and-take with Dybala then Tammy Abraham shot through the goalkeeper's legs after taking a through ball from Dybala.

Also, Udinese won 1-0 at Sampdoria, while Monza and Sassuolo drew 1-1.