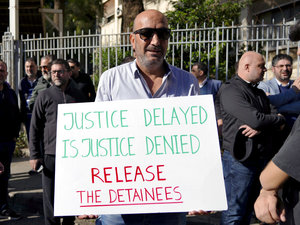 The judge investigating Beirut’s massive 2020 port blast, Tarek Bitar, decided to release five people who had been detained for more than two years. They include former customs chief Shafeek Merhi; Sami Hussein, the head of port’s operations at the time of the blast, and a Syrian worker. Twelve people will remain in custody, including the head of the port authority and the head of the Lebanese customs at the time of the blast.

The move by Bitar to order the release of some of the 17 people who have been held since shortly after the blast came days after protests by family members in Beirut demanding all 17 be set free.

“What Bitar did today is that he committed a major violation of international laws” says Celine Atallah, attorney for detainee Badri Daher, who was customs chief at the time of the blast. “If he believes that he has authority to release some of the detainees it means he has and must release all seventeen detained.

“Under international conventions that Lebanon ratified and human rights laws, their detention is unlawful. I put him responsible that he is holding the seventeen as hostages,” Atallah, a Lebanese-American, told The AP.

Paul Najjar, a survivor of the devastating blast who lost his 3-year-old daughter Alexandra, said the news was unexpected.

“Obviously it’s very positive. This is all that we’ve been asking for,” he told the AP. “We are pleased for the decision (to revive the investigation), whether they (the authorities) stop him very soon or not.”

Najjar is among a handful of relatives of blast victims who have been campaigning for Bitar and advocating for a robust investigation. In recent weeks, they have protested more frequently outside the Justice Palace and Parliament building in Beirut calling for the investigation to continue.

Some politicians have challenged Bitar in court, accusing him of violating the constitution or of showing bias. There were also reports of threats leveled against the judge and the government vowed in late 2021 to increase his security.

Bitar was also challenged by some family members of blast victims, including Ibrahim Hoteit who lost his younger brother in the blast. Hoteit had said that Bitar has become a hurdle to finding out the truth in the case.

Bitar has been the subject of harsh criticism by Lebanon’s powerful Hezbollah leader Hassan Nasrallah. Nasrallah called Bitar’s investigation a “big mistake” and said it was biased. He asked authorities to remove Bitar.

Bitar is the second judge to take the case. The first judge, Fadi Sawan, was forced out after complaints of bias by two Cabinet ministers. If the same happens to Bitar, it could be the final blow to the investigation.