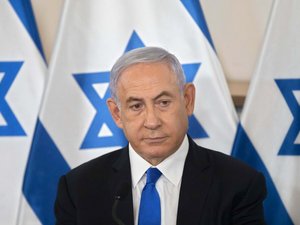 Hundreds of Israeli high-tech workers protested against the government's judicial reform plan Tuesday, claiming the controversial measures will hurt the flourishing sector by undermining the rule of law.

Prime Minister Benjamin Netanyahu's government insists the reforms are essential to correct an imbalance that has given judges too much power over elected officials.

But critics, including tens of thousands of protesters who turned out in Tel Aviv and other cities on Saturday, say the plan threatens Israeli democracy, raising specific alarm over measures that would allow parliament to overrule Supreme Court decisions through a majority vote.

Israel's crucial tech sector, which expanded substantially during Netanyahu's previous tenure in office from 2009 to 2021, accounted for 54 percent of Israeli exports in 2021, or $67 billion, according to the most recent figures from the Israeli Innovation Authority.

"Without democracy, Israeli high tech cannot continue to grow and prosper," Inbal Orbaz, a protest leader, posted on Facebook, adding that the majority of investment comes from abroad.

"No democracy, no high tech," read a placard carried by demonstrators, with rallies against the plan expected to continue as the legislation moves forward.

If passed, the reforms would also give lawmakers authority to appoint Supreme Court judges, a role currently held by a panel of legal experts and overseen by the justice minister.

The proposed revamp has faced rare public criticism from Supreme Court president Esther Hayut, who branded it an "unbridled attack" earlier this month.

Netanyahu and his allies, who last month formed the most right-wing government in Israeli history, have long accused top judges of advancing a left-wing agenda through key court rulings, including some related to the Palestinian conflict.

Netanyahu returned to office last month after spending just 14 months in opposition. He is on trial on corruption charges, which he has dismissed as politically motivated.