Zoaiter calls Bitar 'mentally ill' after being summoned for interrogation 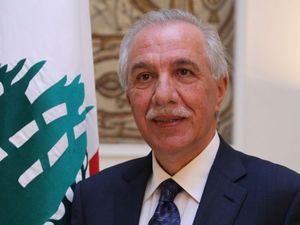 MP Ghazi Zoaiter angrily stormed out Tuesday of a session for the Administration and Justice Parliamentary Committee during the discussion of a law on the independence of the judiciary.

“They want to argue and they are ignorant of the law,” al-Jadeed TV quoted Zoaiter as saying during the session.

Speaking to al-Jadeed, Zoaiter declined to comment on what happened in the meeting, noting that he will "respond” to Bitar’s summoning of him “through the judiciary.”

Bitar, who resumed his investigations on Monday in a surprise move, has scheduled interrogation sessions for Zoaiter as well as ex-minister Nouhad Mashnouq and ex-PM Hassan Diab.

Bitar decided to resume his probe into the deadly August 2020 mega-explosion despite strong political pressure that had led to a suspension of his work for more than a year.

On Tuesday, he charged eight more figures, including Lebanon's top prosecutor Ghassan Oueidat and three judges with "homicide, arson and sabotage" in connection with the port blast case.

One of history's biggest non-nuclear explosions destroyed most of Beirut port and surrounding areas on August 4, 2020, killing more than 215 people and injuring over 6,500.

The blast was caused by a fire in a warehouse where a vast stockpile of the industrial chemical ammonium nitrate had been haphazardly stored for years, authorities said.

In total, 13 people are being prosecuted, including five officials whom Bitar indicted earlier, among them Diab and three former ministers.

Relatives of the dead have been holding monthly vigils ever since the disaster, seeking justice and accountability.

Many families have placed their hopes in Bitar, who has however faced legal challenges, delays and strong resistance from Hezbollah and its allies who accuse him of political bias.

Hezbollah and its ally Amal called for demonstrations to demand his dismissal in October 2021, after which a gunbattle broke out in the Tayyouneh-Ain el-Remmaneh area and seven people were killed.

In Lebanon, state institutions have been reluctant to cooperate with the domestic probe, which began the same month as the explosion.

In February 2021, Bitar's predecessor as lead judge was removed from the case after he had charged high-level politicians.

The interior ministry has also failed to execute arrest warrants issued by Bitar, further undermining his quest for accountability.

Bitar justified his resumption of the probe with a legal study that he has conducted.

In a leaked copy of the study, Bitar mentions the following:

- The Judicial Council is a special court that is totally independent and not outranked by any other court or judicial body.

- The new Code of Criminal Procedure issued in 2001 allowed for the recusal and removal of Judicial Council members but not the judicial investigator.

- The same Code of Criminal Procedure stipulated the appointment of a successor to any removed Judicial Council member to avoid any obstruction of justice.

- Any judicial decision to remove the judicial investigator would certainly entail the abolishment of a post created by governmental decision, which would breach the principle of separation of powers stipulated by the constitution.

Empty of arguements? No worries, just call the judge "mentally ill", and your all clear....(rule applies only in Lebanon, of course..)

"“They want to argue and they are ignorant of the law,” al-Jadeed TV quoted Zoaiter as saying during the session." Then he added: “I am the law".

Wow, you seem very worried and can't sleep at night. I wonder why? Is your house from glass and worried to be stoned? If he is mentally ill then WHY did you send Haj Wafiq Safa to threaten a mentally Ill Judge?