US futures slip the day after tech-powered Wall Street rally 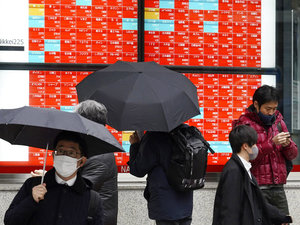 Wall Street stumbled before the bell on Tuesday following a rally the previous day, driven by heavy buying of tech shares as investors bet the Federal Reserve will trim its rate hikes as it makes headway in tamping down inflation.

Markets have been swinging between hope and caution as investors watch to see if the Federal Reserve will dial back on interest rate hikes meant to tame inflation, which has begun to ease in many countries. The fear is that the Fed and other central banks might go too far, tipping the U.S. and other economies into recession by slowing spending and investment too much.

The Fed has already pulled its key overnight rate up to a range of 4.25% to 4.5% from virtually zero early last year, and traders are now betting on a nearly 99% probability that the Fed will raise rates by just a quarter point on Feb. 1, according to CME Group.

"Markets are assuming a pro-growth stance as investors get more comfortable with the idea of an improving macro backdrop ahead of a busy week of data from both a macro and micro perspective," Stephen Innes of SPI Asset Management said in a commentary.

"And if one takes a look under the hood, in the heat of the moment, it has that unmistakable feel of pandemic-era trading, supported by solid moves in mega cap tech stocks," he said.

Another partisan battle in Washington over the nation's ability to borrow may roil markets if the Democrats and Republicans can't agree on allowing the U.S. government to borrow more.

In Europe, Germany's DAX and Britain's FTSE 100 each slipped 0.3%, while the CAC 40 in Paris was essentially unchanged.

A preliminary reading for manufacturing in Japan remained steady in January at its lowest level in over two years, with exports declining faster. But the strength in technology shares helped spur buying of manufacturers like electronics maker Omron, which gained 2.7%, and robot supplier Fanuc Corp., which gained 1.6%.

Trading has been generally upbeat in Asia, though many regional markets were closed for the Lunar New Year.

Corporate earnings, now in high gear, are seen as a good indicator of how well companies are coping with the slowing economy and higher costs. Profits are one of the main levers that set stock prices.

This week, more than seven dozen companies in the S&P 500 will report their results for the last three months of 2022. That includes headliners like Microsoft on Tuesday and Tesla on Wednesday.

Such big tech-oriented companies have begun layoffs to slash expenses after acknowledging they misread the boom coming out of the pandemic and grew too quickly. Spotify said Monday it will cut 6% of its workforce, and it shares rose 2.1%.

Big Tech stocks have a major influence on Wall Street because they're some of the market's most valuable. After soaring through the pandemic thanks to super-low interest rates and a surge in demand from suddenly homebound customers, they've been struggling over the last year as the Fed has sharply raised rates.

Shares in 3M slid more than 5% in premarket Tuesday after the the manufacturer and consumer products company reported declines in fourth-quarter and full-year sales. The Minnesota-based maker of Post-it Notes and a range of personal protective equipment also missed Wall Street's fourth-quarter profit targets and announced 2,500 job cuts.

In other trading Tuesday, U.S. benchmark crude oil gained 34 cents to $81.96 per barrel in electronic trading on the New York Mercantile Exchange. It lost 2 cents to $81.62 on Monday.

Brent crude, the pricing benchmark for international trading, picked up 19 cents to $88.35 per barrel.