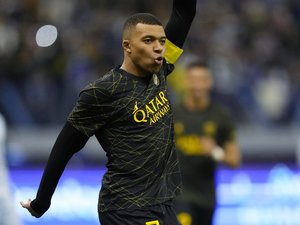 There's a busy February ahead for Paris Saint-Germain.

Next month will be packed with a series of big matches for PSG and likely to set the tone for the rest of the defending French champion's season.

But PSG won't be sorry to see the end of January. It has been struggling since the start of the new year, with two defeats in its last three league matches. Although the 7-0 demolition of amateur team Pays de Cassel in the French Cup on Monday boosted morale, Christophe Galtier's team is not in the best of form ahead of a loaded period.

PSG will play seven matches in February, including major tests against Bayern Munich in the Champions League and bitter rival Marseille in a domestic doubleheader.

"There are things for us to put right," Galtier said after his team saw its lead at the top of the league over second-place Lens cut to three points.

In the two league defeats against Lens and Rennes, PSG's lack of inspiration and rhythm was worrying for a team whose ambition is still to win the Champions League, Europe's top club competition, for the first time.

"When you are PSG, yes, there is an urgency," Galtier said. "We must find our game, have much more energy, much more rhythm, much more intensity."

PSG's matches in February start at struggling Montpellier before hosting Toulouse. Things are expected to get harder with a trip to Marseille's Stade Velodrome in the round of 16 of the French Cup in what is the biggest fixture in French soccer.

Then it will be another away game at fourth-place Monaco before Bayern travels to the French capital for the first leg of their round-of-16 match in the Champions League on Feb. 14. After that, PSG will host Lille and travel again to third-place Marseille in the league.

"The calendar is like that, unfortunately," Galtier said. "With the accumulation of matches, we'll need to be careful with the players' management."

There are concerns surrounding the form of Neymar, who is looking a shadow of the inspired and ruthless player he was in the first part of the season before damaging his right ankle at the World Cup in Qatar.

The picture is not rosier in defense, as Presnel Kimpembe has yet to recover from an Achilles injury, while right back Nordi Mukiele is out with a thigh problem expected to keep him sidelined for weeks.

The good news is that Kylian Mbappe remains unstoppable.

After a stunning World Cup, the France striker became the first PSG player to hit five goals in a competitive game against Pays de Cassel, taking his overall tally with the club to 196 goals — just four shy of Edinson Cavani's record.

As for the current shape of PSG's upcoming rivals, Bundesliga leader Bayern has just restarted its season after a two-month winter break, and looked rusty in its error-strewn 1-1 draw with Leipzig last week.

But Marseille is in stunning form, having extended its winning streak to a club-record equaling eight matches in all competitions last weekend.

"We don't know how far we can go, but we're aiming as high as possible," Marseille midfielder Valentin Rongier said.