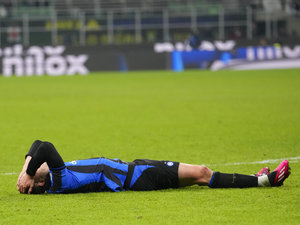 Inter Milan's Italian Super Cup celebration was ruined with a 1-0 home loss to Empoli in Serie A on Monday.

Milan Skriniar was sent off with two yellow cards in the first half to leave Inter with 10 men, and 19-year-old Tommaso Baldanzi scored for Empoli midway through the second half following a poor effort from Inter goalkeeper Andre Onana.

Inter remained third, one point behind Milan, which visits Lazio on Tuesday.

Empoli, which extended its unbeaten run to five matches, moved ahead of Juventus into ninth.

Also, Bologna was held 1-1 at home by last-place Cremonese.