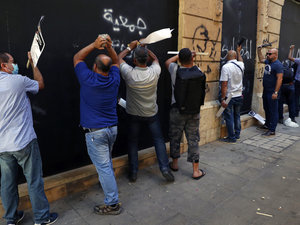 The arm-wrestling between Prosecutor General Ghassan Oueidat and judge Tarek Bitar, who is investigating the deadly 2020 Beirut port blast, is the latest of crisis-torn Lebanon's mounting woes, as the value of the national currency hit a new record low against the U.S. dollar on Wednesday.

Dozens protested in front of the Central Bank in Beirut, denouncing the slide of the Lebanese pound, which began in 2019.

Protesters blocked roads in front of the Central Bank in Hamra and in other regions inside and outside the capital, to voice anger over the weakened Lebanese pound and deteriorating living conditions, as the national pound slumped to 56,000 against the dollar.

The value of the pound had hit a psychologically important threshold last Thursday, trading at 50,000 to the dollar, as the country's deeply divided Parliament failed to elect a president for the eleventh time.

Since an unprecedented financial crisis hit Lebanon in late 2019, the currency has lost more than 95 percent of its value and much of the population has been plunged into poverty.

Factional deadlock has left the country largely leaderless in the face of the political and economic turmoil, with a vacant presidency, a central bank chief under European investigation and a government with only caretaker powers.

The massive explosion on August 4, 2020 at Beirut port had devastated entire neighborhoods of the capital, killed more than 200 people and injured at least 6,500.

State institutions have been reluctant to cooperate with the probe, which began the same month as the explosion.

The prosecution service rejected Tuesday the resumption of the probe.

"We were only informed of Bitar's decision (to resume the probe) through the media," Oueidat said. "Since he considers that the general prosecution doesn't exist, we will also act like he doesn't exist."

Meanwhile, protesting the agonizing political gridlock, some independent lawmakers are sleeping in parliament until a new head of state is elected.

People need to start being wheel barrows as that what they will need to load their LL to go buy food if there is any. Wymar Republic anyone. Look up history and learn.