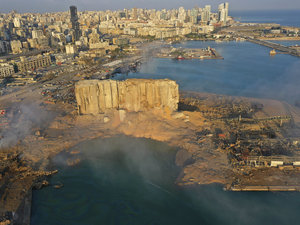 “Very important decisions” will be taken in the Beirut port blast file within 24 hours, a pro-Hezbollah journalist said on Wednesday.

“All eyes on the Justice Palace.. Very important decisions will be taken in the port file within 24 hours,” the journalist Salem Zahran tweeted.

LBCI television meanwhile reported that the Higher Judicial Council will convene at 1pm Thursday at an invitation from its chief Judge Suheil Abboud to discuss “the effects resulting from the judicial investigator’s decision” to resume the probe.

“The issue of appointing an alternate judge will be discussed,” the TV network added.

Sources close to the camp opposed to Beirut port blast investigator Judge Tarek Bitar meanwhile told Nidaa al-Watan newspaper that “the issue of naming an alternate judicial investigator was put on the front burner over the past hours.”

“Once the state prosecutor provides the needed quorum for the convention of the (Higher) Judicial Council to discuss an agenda not limited to the judicial investigation, this article will be approved by a simple majority in order to withdraw the file from the hand of the incumbent judicial investigator, especially in terms of releasing all the detainees pending further investigations,” the sources said.

OMG, the inimaginable is going to happen. That is simply unforgivable!