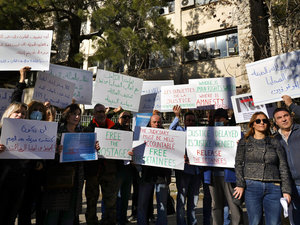 Oueidat said that he charged Bitar in order to "prevent sedition."

He also summoned Bitar for questioning on Thursday morning, a judicial official said.

MTV later reported that Oueidat dispatched a judicial officer to Bitar’s home in Rabieh to inform him of the need to appear before him on Thursday and that Bitar refused to receive both the judicial officer and the lawsuit filed against him.

Moreover, Oueidat ordered the release of all suspects detained in connection with the deadly 2020 Beirut port blast, according to a judicial document seen by AFP Wednesday.

Oueidat ordered the "release of all those detained over the Beirut port explosion case, without exception" and banned them from travel, the document said.

"Security forces' enforcement of the state prosecutor's order to release the detainees will be a coup against the law," Bitar meanwhile told al-Jadeed.

"Only the judicial investigator has the right to issue release orders and accordingly Stat Prosecutor Ghassan Oueidat's decision has no legal value," Bitar added.

Bitar this week had resumed work on the port blast investigation after a 13-month hiatus, charging several high-level officials, including Oueidat over the blast.

The prosecutor general in turn rejected the charges and Bitar's return to the politically charged case.

Oueidat's true colors are now revealed, he works for the mafia. Anyone in his right mind wouldn't order the release of the culprits.

Welcome to the Jungle, This country is officially a failed state. Mob rule is what it it is.