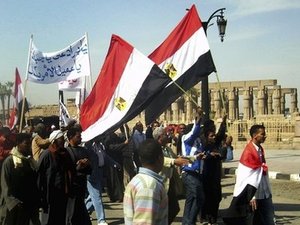 Wandering unhurried in the Egyptian temple of Luxor and photographing the towering colonnades of Karnak without being jostled may be a dream come true for tourists.

But it is a nightmare for traders losing their precious livelihood.

The hotels are empty, souks deserted and tour guides idle. Luxor has been but a shadow of its former self since the uprising against the rule of President Hosni Mubarak started on January 25.

"Normally, this car park is full of minibuses," laments Ebrahim Moses at the entrance of the Luxor Temple, a marvels of ancient Egyptian architecture and a big tourist draw, under the eye of a sleeping guard slumped in his chair.

"Economically, it's serious. Travel agents aren't working, no one is selling anything," whispers Moses, for 60 years a tour guide.

"Let's hope the dictator and the tourists come back," he said, taking a pull on his Cleopatra cigarette.

Luxor is normally full at this time of year, but the popular movement against Mubarak's regime and the violence across the country have scared off tourists from around the world.

National carrier Egyptair has reduced its connecting flights from Cairo to Luxor to a minimum, and no charter flights are landing at the airport.

Along the Nile, dozens of cruise ships are moored with no tourists to take along the timeless river.

Not since the 1997 murder of 62 tourists by an Islamist group has Luxor been so deserted. That drought lasted "a few months," recalls Moses.

Alone in the ruins of the temple with only a few Egyptians, Mary Jo Wolszon's family are thrilled.

"This is the best time to visit this place," said Wolszon, who came from Minnesota with her husband to visit her Cairo-based daughter.

"I had no fear" in the capital, despite the large anti-regime demonstrations. As for Luxor, "it's magnificent", and "we are the only ones in the hotel, " she said, watching his grandchildren admire the hieroglyphs.

A short way into the souk, the stall-holders drink tea and play chess to pass the time between customers. The stalls are filled with crystal pyramids, papyrus and other pharaonic trinkets. But in the long shady lane bathed in a heavy scent of spices, there is not a single tourist with whom to haggle.

"I'm ready to drop my prices," says Pascal Mahouid, who owns a gift shop. "It's been fifteen days since we had any business. It's hard."

"What they're doing is all well and good -- it's good for our children," he said of the protesters on Tahrir Square in Cairo, the epicenter of the revolt. "But here we do not want to demonstrate, it scares away tourists."

On the road leading to the temple of Karnak, one of the most famous sites in the Pharaonic era, an army tank stands guard.

Several hundred people demonstrated in Luxor against the government, but no serious incidents marred the gathering, according to witnesses.

Only the broken windows of the public library, sponsored by Suzanne Mubarak, wife of the president, openly reflect the local discontent.

Guards at the entrance to Karnak are startled by the arrival of a visitor. According to the teller, he sold 40 entry tickets today.

From the ruins emerges a mirage: Swiss tourists Michael Mueller, 41, and his wife, Lisa, 25. "We might go to Aswan tomorrow," Mueller said. "But my heart is in Cairo."