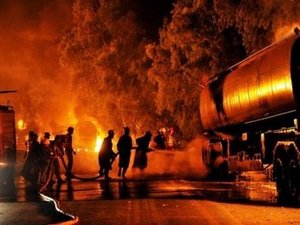 Gunmen Saturday torched at least 29 oil tankers in southwest Pakistan, the sixth attack in just over a week as Islamist militants continue to target a NATO supply route into Afghanistan.

Two police officers were hurt in the attack in remote Mitri area, 180 kilometers (112 miles) southeast of Quetta, the capital of oil and gas rich Baluchistan province, which borders Iran and Afghanistan.

He said the fire engulfed 29 tankers, adding the local administration have called firefighters from the nearby Sibbi town to extinguish the fire.

"We will be able to have a precise idea about the losses only after the fire is brought under control."

Mateen said the tankers, which were on their way to Afghanistan had stopped in Mitri overnight.

Abdul Qadir, an employee at the roadside hotel told AFP: "I was fast asleep and got up with sound of intense firing.

"When I came out, I saw a group of armed men warning other employees and vehicle drivers to stay away. The gunfire was so intense that it triggered massive fire engulfing all tankers that were parked in front of the hotel," Qadir said.

Nobody has so far claimed responsibility for the latest attack, which came three days after militants torched over 40 NATO oil tankers and containers in the northwestern city of Nowshera and in southwestern Quetta.

Taliban militants have launched five attacks on NATO supply vehicles in Pakistan in the past week to avenge a new wave of U.S. drone strikes targeting Taliban and Al-Qaida militants in the country's northwest.

Pakistani authorities have reported 26 drone attacks since September 3 which have killed more than 140 people in the region, a hub for homegrown and foreign militants fighting in Afghanistan.

The strikes have been linked to a U.S. plan to disrupt an alleged plot by extremists to launch Mumbai-style attacks in Europe.

The latest tanker attack came as the main land route for NATO supplies crossing from Pakistan to Afghanistan at Torkham in the northwest remained closed for tenth day running.

Pakistan shut the route at Torkham in protest at a cross-border NATO helicopter attack that officials blamed for the deaths of three Pakistani soldiers. The alliance said its personnel had fired back in self-defense.

U.S. ambassador to Pakistan Anne Patterson Wednesday apologized on behalf of the American people over what she called the "terrible accident".(AFP)