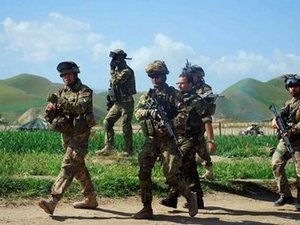 Four Italian soldiers were killed and a fifth seriously injured in Afghanistan when a bomb blew up their vehicle on Saturday, the defense ministry announced.

The soldiers were ambushed as they returned from a mission in the Gulistan valley in the southwestern province of Farah, General Massimo Fogari, head of the press service at the defense chief of staff told the television network Tg 24.

They were escorting a convoy of 70 civilian trucks and traveling in an armored car which took the full force of the explosion of a powerful home-made bomb, the Italian news agency ANSA said.

"After the blast, the convoy came under fire until the attackers were forced to flee" by the military retaliating, Fogari said, adding that the attack was typical of the Taliban's modus operandi.

The wounded soldier was evacuated by helicopter and said to be conscious despite suffering multiple injuries.

The zone where the attack happened is one of three places recently allocated to the control of Italian forces.

The deaths took to 34 the number of troops from Italy to die in Afghanistan since 2004, when Italian troops deployed to the war-torn country as part of a NATO-led mission to confront a Taliban-led insurgency.

Italy has about 3,400 soldiers in Afghanistan, most of them in the west of the country. The deployment is set to grow to 4,000 soldiers by the end of the year.

The latest deaths took the number of foreign troops killed this year in the conflict to 572, according to a toll complied by AFP from the independent Internet site icasualties.org.

The first nine months of 2010 have been the deadliest for international troops since a US-led international coalition chased the Taliban from power in late 2001.

The toll of 521 dead for 2009 had already made it by far and away the bloodiest year in the conflict, which has escalated markedly in the past three years.(AFP)