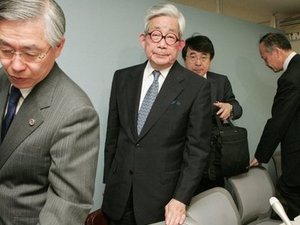 Authors from India, China and Japan swept the shortlist for Asia's top literary prize on Tuesday, with a debut novelist and Nobel Prize winner among those vying for the $30,000 award.

Manu Joseph grabbed one of five shortlisted spots for The Man Asian Literary Prize with his debut "Serious Men", while Japanese author Kenzaburo Oe, winner of the 1994 Nobel Prize for Literature, was also among the finalists for "The Changeling".

The story tells of one man's search to find out why his brother-in-law killed himself.

In a videoconference from Britain on Tuesday "Brick Lane" author Monica Ali, one of the award's judges, called Joseph's story set in the slums of Mumbai "seriously funny" and "ingenious", while praising Oe for his "rich and complex work".

Ogawa's novel is set in a crumbling seaside hotel and follows a quiet, 17-year-old girl who finds herself drawn to a middle-aged man who has been kicked out of a room with a prostitute.

The winner will be announced at a dinner in Hong Kong next month.

"(The books) were judged purely on literary excellence," Ali added.

"That was the only criteria we used."

All the shortlisted titles touched on the human experience "in language that was beautifully honed", Ali said.

The prize, which is limited to Asian authors, was founded in 2007 and shares the same sponsor as the Man Booker Prize, among the world's top literary awards.

Professor David Parker, the Asian award's chairman, said he was aiming eventually to put it in the same league as the Booker prize, and "to give Asian authors the same kind of recognition".

The judges were tasked with choosing the shortlist from a selection of 10 books.

The longlist, announced in December, included six titles by Indian authors, two by Japanese writers and one each from China and the Philippines, which were whittled down from 54 titles from 14 Asian countries.

The longlist included "Way To Go" by Indian author Upamanyu Chatterjee, a tale about an 85-year-old man who goes missing, "Dahanu Road" by Anosh Irani, "Monkey-man" by Usha K.R. and "Tiger Hills" by Sarita Mandanna.

"Below the Crying Mountain" by Filipina writer Criselda Yabes, another longlisted title, was set during the Moro rebellion that broke out in Sulu, in the Philippines, in the 1970s.