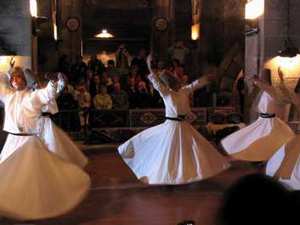 With flags flying, drums beating and incense burning, thousands of Sudanese faithful converged in Khartoum's Mulid square for the culmination of an Islamic festival that allowed them to leave their daily cares behind.

"Today is a very special day. The people, when they come here, they put all their problems behind them and remember the good things in life," said Ibrahim Ismaili, 40.

The father of three had come with his two small sons to enjoy the Sufi rituals being practiced in dozens of tents around the square, transformed on Monday night into a mass of light, color and sound for the 12-day festival that celebrates, Sudanese-style, the birthday of the Prophet Mohammed.

It offers a welcome distraction for the many thousands attending similar celebrations across north Sudan, who face tough material challenges since the Khartoum government pushed through a raft of austerity measures last month aimed at bolstering its fragile economy.

Fuel and sugar prices soared, by as much as 40 percent, as subsidies were slashed in an effort to curb the country's import bill.

In one tent, more than 200 people stood in a circle, dancing in a slow, trance-like state, chanting in unison and waving their arms in the air as they pray to God.

"The people here, they are feeling so comfortable, they will stay all night," said Abdelazim, 26, an orthopedic technician from Gezira state, south of Khartoum.

"Some of them feel like their minds are out of their bodies. At this time, they do not feel anything outside. An old man who cannot normally stand for 15 minutes; here he will dance for three of four hours," he added.

Mulid square, where the biggest of Khartoum's Sufi celebrations take place, is located in the capital's twin city Omdurman, just next to the tomb of Sudan's legendary spiritual leader Muhammad Ahmad al-Mahdi, who defeated the British colonial forces in 1885.

Each tent in the square represents a different Sufi leader, or sheikh, who heads his own mystical Islamic order, known as tariqa, and is revered by his followers.

"There are lots of different Sufiyya, but there are no problems between them," Abdelazim explained.

Among the most influential of Sudan's many Sufi orders are the Khatmiyya and the Ansar al-Mahdi, which are headed by the leaders of the two main opposition parties, Mohamed Osman al-Mirghani and former prime minister Sadiq al-Mahdi.

Not far from Mahdi's tent, hundreds of faithful sat on the ground clapping and swaying, and offering money to a man dancing before them, as three others played tambourines and sang praises to the Prophet and someone walked through the crowd offering food and tea.

"This event brings so many people together. They just forget about their sufferings, because this is a celebration," said Yassir, 29.

Even orthodox Sudanese Muslims, who tend to frown on certain Sufi practices, had come to enjoy the party in Mulid square.

"I do not belong to any tariqa, because it is not in our Islam. They wear different colored clothes, and they bang their drums... and they do some things that are not good. This is not the Islamic way," said Ali, 21, a student.

"But still I am celebrating with them, because we are all Muslim."