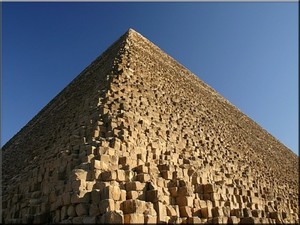 Skilled thieves slid down ropes from a skylight at the Egyptian Museum in Cairo while riots raged outside, targeting priceless ancient treasures, the minister for antiquities said Wednesday.

Zahi Hawass, Egypt's minister of state for antiquities, praised protesters for helping the armed forces protect the bulk of the museum's collection, and insisted Egypt is once more safe for foreign visitors.

And he added that Egypt's ancient sites and archaeological museums could reopen to tourists as early as Saturday, if the government approves.

Standing on the steps of the museum, he told reporters that he had rushed to the scene on January 29, one day after clashes broke out in surrounding streets between pro and anti-government crowds.

"I found two important things. Number one: I found all the angry people outside were protecting Cairo museum, and when I came in I found many angry people with the army commanders protecting the museum," he said.

Nine looters were detained by the army and investigations are continuing following the riot, which saw scores killed and the next door headquarters of now deposed autocrat Hosni Mubarak's ruling party burnt out.

"But a few people knew that this was Cairo museum. They came from the fire stairs and they climbed on top and they broke the glass on top and with ropes, like in the movies, they came about 30 feet down to the ground," he said.

One of the thieves cut himself and bled on the floor, he added.

The robbers did not get the museum's most iconic exhibits, such as the boy king Tutankhamun's funeral mask, but did grab eight major pieces, the most important of which was a limestone statue of Akhenaton making an offering

"They opened 13 show cases," Hawass said. "Of all the 70 objects that were thrown on the ground, only 20 to 25 need restoration, but the rest are in very good condition. I still believe the Cairo museum is safe."

Three of the missing pieces have been recovered, two which were dropped outside and one that was found under a damaged display case.

"We found the heart scarab, we found a statue and we found the statue of the goddess that was holding King Tut, the face was scratched and King Tut is still missing," Hawass explained.

Amid the near collapse of Egypt's crucial tourism industry in the wake of the revolt, Hawass was at pains to point out that none of the country's other attractions -- from the Pyramids to the Valley of the Kings -- had been hit.

He boasted that a million tourists had been able to leave the country safely at the height of the protests, and called on them to come back.

And he was at pains not to blame the pro-democracy protesters who forced Mubarak to quit office on Friday for the thefts, praising them for forming a human chain to protect the museum from more extensive looting.

"The pro-government and the anti-government agreed on one thing, they both wanted to protect the museum," he said.

Tourism accounts for six percent of Egypt's gross domestic product, and February should be the height of the holiday season. It brought in $13 billion in 2010, with a record 15 million people visiting the Land of the Pharaohs.