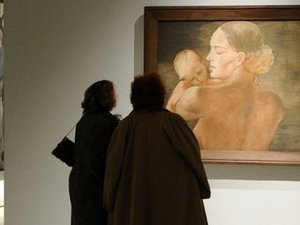 An exhibition of paintings by Soviet artist Alexander Deyneka opened in Rome on Thursday, inaugurating a year packed with hundreds of joint cultural events between Italy and Russia.

The paintings on loan from Russia depict famous scenes from the Russian Revolution and World War II, but also nudes and images of daily life in the Soviet Union with factory workers, sportsmen and children.

Deyneka (1899-1969) came from a family of railroad workers and started out as a police photographer after graduating from art school. He made mosaics in the 1930s for Mayakovskaya metro station in central Moscow.

Russian President Dmitry Medvedev visited Italy this week and said the 12 months ahead would see some 500 events organised by the two countries including exhibitions, concerts, film showings and plays.

The Deyneka ehibit runs in Rome's Palazzo delle Esposizioni until May 1.