Gates Accuses EU of Pushing Turkey Away from West 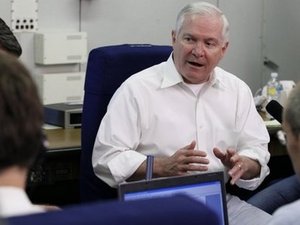 The EU's refusal to accept Turkey as a member swiftly has partly caused Ankara's foreign policy shift and the deterioration in its relations with Israel, U.S. Defense Secretary Robert Gates said Wednesday.

"The deterioration in the relationship between Turkey and Israel over the past year or so is a matter of concern," Gates told reporters in London.

He said that "if there is anything to the notion that Turkey is, if you will, moving eastward, it is my view in no small part because it was pushed and pushed by some in Europe, refusing to give Turkey the kind of organic link to the West that Turkey sought."

Since starting European Union membership talks in 2005, Ankara has succeeded in opening only 12 of the 35 chapters that candidate countries are required to complete in order to join the bloc.

"I think we have to think long and hard about why" policies have changed in Turkey, Gates said, and "about what we might be able to do to counter them and make the stronger linkages with the West more apparently of interest and value to Turkey's leaders."

Ties between NATO's sole mainly Muslim member and Israel had been damaged amid vehement Turkish criticism of Israel's devastating war on the Gaza Strip last year and Ankara's improving ties with Iran.

But they plunged following a raid by Israeli commandos on an aid flotilla bound for Gaza on May 31, which left nine Turkish activists dead.

Ankara -- once Israel's main regional ally -- has now recalled its ambassador from Tel Aviv and scrapped joint military drills, saying economic and defense ties with Israel would be reduced to a "minimum level".

Gates expressed hope that ties between Israel and Turkey could be restored.