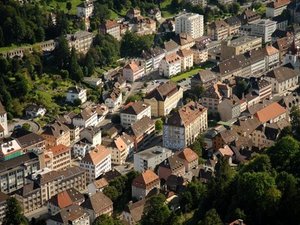 It was not known what caused the fire, which destroyed seven apartments, a daycare and two businesses in the four-storey building, the town said in a statement.

Fourteen people inside the building when the blaze broke out were rescued by firefighters and none were injured, city spokesman Remy Gogniat told Agence France Presse.

Little was left of the building but its facade, officials said.

Built in the 19th century to house a watchmaking factory, the building was a "significant element" of the city's urban heritage, the statement said, estimating damages from the fire at more than three million Swiss francs ($3.2 million, 2.3 million Euros).

The watchmaking towns of La Chaux-de-Fonds and nearby Le Locle in Switzerland's Jura mountains were declared world heritage sites in 2009 by the United Nations Educational, Scientific and Cultural Organization, which singled out the area as an "exceptional example of organic urban ensembles entirely dedicated to a single industry".