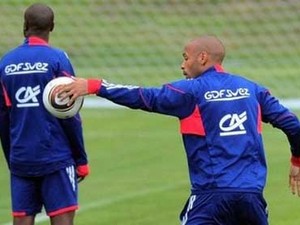 Drugs scandals, shark attacks, head-butting, insults, stamping on someone's genitals and the appearance of Jesus Christ: these are just some of the things which can be bet on at the World Cup.

British bookmakers -- who are predicting they will handle a record-breaking one billion pounds (1.2 billion euros, 1.4 billion dollars) on the tournament -- are taking bets on all manner of bizarre events in South Africa.

Of course, bets will be placed on who will win the tournament, with Spain the favorites.

But others want to put their money on who will get sent off first, who will commit the most fouls and who volatile Argentina manager Diego Maradona will insult first.

But what will be the first goal celebration?

Which team will be the first to celebrate by revealing a Jesus Christ t-shirt?

Spain's David Villa at 9/2 is the favorite to be the first player to bless himself after scoring a goal in Durban's Moses Mabhida stadium, followed by team-mate Fernando Torres.

However, the bets are also on for when football gets a little more unholy.

In the stakes for who or what Maradona will insult first, a match official is 11/8, followed by South Africa at 2/1, the media at 3/1 and FIFA or its president Sepp Blatter at 8/1.

Chile are 16/1 favorites to be the first team to fail a drugs test, followed by Mexico, South Africa and Argentina at 18/1, then Ivory Coast and Paraguay at 20/1.

France striker Thierry Henry, whose handball helped Les Bleus beat Ireland and qualify for the tournament, is 100/1 to score with his hand.

Argentina's Javier Mascherano (6/1) and Gabriel Heinze (9/1) are favorites to commit the most fouls, followed by Brazil captain Lucio and England's John Terry at 10/1.

On the receiving end, Argentina's Lionel Messi is 4/6 to be fouled the most, then Portugal's Cristiano Ronaldo at 5/2 and England's Wayne Rooney at 10/3.

Rooney is 150/1 to stamp on someone's genitals -- surely a red card offence.

But also at 150/1 is for Steven Gerrard to forget he is not playing for Liverpool and accidentally set up club colleague Torres for a winning goal should England play Spain.

The classic way for England to finish their campaign is with a draw followed by a penalty shoot-out defeat and the merciless lambasting by the media of anyone missing their spot kick.

Jermain Defoe is the 9/1 favorite to miss the last kick if England are eliminated, followed by Lampard, Gerrard and James Milner at 10/1.(AFP)