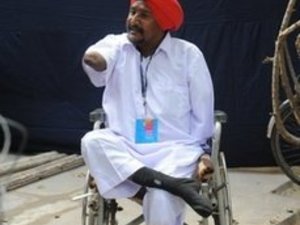 Bant Singh, a scarred survivor of class violence in rural India, has an indisputable claim to be a voice for India's impoverished and muted millions.

The folk singer lost both arms and a leg in an attack five years ago after he dared to challenge high-caste landlords in his area of the northwestern state of Punjab who had raped his 17-year-old daughter.

Set upon by a gang armed with iron bars, he was beaten to a pulp and left for dead, but neither the assault nor the subsequent amputations broke his resolve to denounce oppression in India's hinterlands.

"We as the proletariat want the same rights as the rich, a life of respect and equality," the Communist party member told Agence France Presse during an interview at his home, a humble brick building with mud floors.

"My songs are words that I spit into the air like drops of blood."

Singh knows the grinding poverty and discrimination felt by hundreds of millions of poor rural Indians and members of the lowest castes, placed in eternal inferiority to their higher caste and richer brethren.

Crimes against the poor and low-caste "dalits" are routinely hushed up or ignored in isolated rural areas, but Singh's tenacity and refusal to keep quiet led to the conviction of the seven men accused of raping his daughter.

"Before the trial, some people tried to tempt me with money and land... but I had a trial and I used to stare at the landlords during the hearings," he said.

They were sentenced to several years in prison, but were released four months ago under caution.

Singh, married with three children, was given compensation of two buffalo and a million rupees (20,000 dollars) and was promised a parcel of land which has still not been handed over by the local government.

"I don't care if my limbs are cut off. I've my voice and I've the hands and feet of many people who encourage me," he says from the district of Mansa, eight hours' drive from the Indian capital New Delhi.

"I could have been born like this, so I don't think about my body. My tongue has not been cut off so I don't feel the loss."

Singh, who says he is now in his early 40s, began singing folk songs in his Punjabi dialect at the age of 10 when he said he already knew he did not want to be exploited as a laborer -- the destiny of most men born in his position.

He became a shepherd and part-time singer before the attack in 2006 catapulted him to national fame when his story began appearing in newspapers and magazines.

He now plans to reach exploited workers and India's middle classes through a tie-up with musicians of a different sort.

Taru Dalmia, a Delhi-based hip hop artist known as Delhi Sultanate, has started collaboration with Singh along with other artists who share a dislike of the way India is developing socially and economically.

"We both have a similar orientation, we talk about similar things: violence, the police, human rights," Dalmia told AFP during a trip to Singh's house during which he unveiled the results of their work together.

"Most mainstream music in India is Bollywood culture, it's commercial and elitist. There should be political songs," says the 30-year-old.

"I have a big problem on what's happening in India in terms of development. The so-called middle class is only five or 10 percent of the population: that's big enough to create a market for foreign firms but that's not the reality of the country."

Dalmia and Singh's joint project is called "Word, Sound, Power" and can be seen at http://www.wordsoundpower.org.