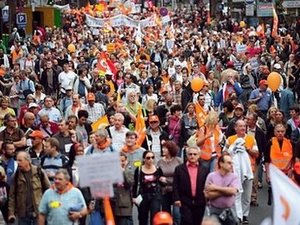 France's Prime Minister Francois Fillon on Tuesday ruled out making new concessions to strikers protesting against the raising of the retirement age from 60 to 62, lawmakers said.

"We have reached the limit of what is possible" in amending the bill, currently under debate in the upper house Senate, lawmakers quoted Prime Minister Francois Fillon as telling them at a meeting.

The government last week amended the bill to add certain exemptions for working mothers, but unions rejected the concessions as inadequate and pressed on with open-ended strikes in several sectors on Tuesday.

The pensions bill is key to President Nicolas Sarkozy's reform agenda as he eyes re-election in 2012. He says it is necessary to bring down France's public deficit.

Unions and political opponents say the reform places an unfair burden on workers and have proposed alternative measures.(AFP)