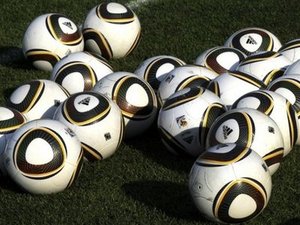 World Cup fever is sweeping across Asia as hundreds of millions of fans in the football-mad region count down to the start of an event that's a surefire winner for pubs, clubs and bookmakers.

From Seoul to Sydney, Beijing to Bangkok, preparations are underway for Friday's kick-off thousands of miles away in South Africa, heralding a month of late nights and bleary-eyed mornings for many Asian fans.

"We're expecting the hotel lounge to be full every night," said Matthew Rashid, manager of the Equatorial in Kuala Lumpur, where many bars and pubs are already decked out with colourful bunting and posters.

"Everyone's excited and I'll wear a jersey to work throughout the World Cup," said the Brazil supporter.

In South Korea, which takes on Greece on Saturday, giant screens are being set up in public squares, sports stadiums and other locations around the country for people to cheer on the national team.

On the other side of the world's most heavily militarised border, North Koreans will be following a rare appearance by their side, who have qualified for the event for the first time in 44 years.

But they risk being left without any television coverage after Seoul refused to provide a free feed to its impoverished neighbour owing to tensions over the sinking of a South Korean warship in March.

In Tokyo, where interest in the sport has taken off since Japan co-hosted the 2002 World Cup, suited white-collar workers were among those taking a break from their hectic schedules for a screaming contest to warm up for kick-off.

The winner was a man whose cry of "goal" lasted for 32 seconds. For those who prefer just to watch, Sony will provide 3D images of the action at about 500 sites around Japan.

Pubs and bars in Bangkok -- still reeling from the deadly "Red Shirt" protests -- are hoping the event will tempt back the punters, despite a state of emergency which in theory bans public gatherings of more than five people.

The authorities have reassured football fans they will not be arrested for watching the matches -- even if they wear a red jersey.

"It's no problem to wear a red shirt and cheer at the football as long as there are no guns involved," said a Thai army spokesman.

Security will be particularly tight for kickoff at a Bangkok prison where inmates from around the globe are holding their own version of the World Cup.

Vietnam is also soccer obsessed and the hugely anticipated event is expected to all but bring daily life to a halt, while in Afghanistan foreign troops will be crowding around every available television.

Christoph Schmidt, a 31-year-old German-born US corporal in the 97th Military Police Battalion in Kandahar, had no doubts who he will supporting.

"I am definitely for Germany. There is no debate. The US might as well send their women's soccer team," he said.

At Casey Station in Antarctica, Australian scientists will tune in over the radio when their team play Germany on Sunday.

"They'll listen to it but they can't see it," a spokeswoman told AFP.

Stung by the national side's failure to qualify, Chinese fans can at least drown their sorrows while watching the matches at bars and parks across the nation, as well as at the South African pavilion at the World Expo in Shanghai.

While stock markets may see a dip in trading as investors turn their eyes to South Africa, bookies are expected to see a surge in turnover, even in countries such as Thailand and Cambodia where betting is illegal.

Yet while many businesses are happy to be infected with World Cup fever, others are bracing for a month of lost productivity.

In Indonesia, civil servants have been warned of pay cuts if they fail to turn up on time over the next month.

"Imagine if football lovers come late every day to the office, how much money will we lose?" said a Jakarta government spokesman.(AFP)