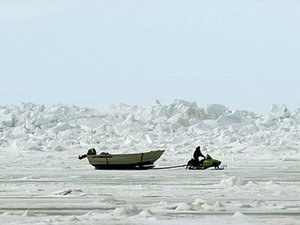 Scientists on Thursday announced they have discovered the oldest human remains ever found in sub-Arctic North America, offering a new window into the lives of the continent's earliest inhabitants.

The discovery of the partially-cremated skeletal remains was made at an fire pit within an ancient dwelling at Alaska's Upward Sun River site, according to an article appearing in the February 25 edition of the journal Science.

Researchers said remains, found at a newly excavated archaeological site in central Alaska, appear to be that of a three-year-old child who had been interred in the pit following a burial rite.

Radiocarbon dating of wood at the site indicates the cremation took place roughly 11,500 years ago, when the Bering Land Bridge may still have connected Alaska and Asia, according to the scientists from the University of Alaska at Fairbanks.

"This site reflects many different behaviors never before seen in this part of the world during the last Ice Age, and the preservation and lack of disturbance allows us to explore the life ways of these ancient peoples in new ways," said archaeologist Ben Potter who excavated the site with four colleagues.

Researchers said study of the teeth at the site confirm that the child, who has been given the name Xaasaa Cheege Ts'eniin (haw-SAW CHAG tse-NEEN), which means "Upward Sun River Mouth Child," is biologically affiliated with Native Americans and Northeast Asians.

The remains from the site, researchers said, are likely the oldest human remains found in northern North America as well as the second-youngest Ice Age child on the continent.

The archaeologists said they are working hand-in-hand with Alaska Natives to ensure that the excavation and subsequent examination will be carried out in a way that is respectful of traditional culture.

Support and funding for the excavation was provided by the U.S. National Science Foundation, which praised the finding as a major breakthrough.

"This exciting, groundbreaking and multi-faceted research is in the best traditions of the social science research that NSF supports in the Arctic," said Anna Kerttula de Echave, the project's program officer at the NSF Office of Polar Programs.

"Equally significant is that the approach taken by the researchers reflects the importance, in modern arctic science, of collaborating with Native people as full partners in discovery."

The burial pit contained not only the child's remains, but also those of small mammals, birds, and fish as well as plants.

Because the human remains were in the uppermost part of the pit, above the animal remains, the researchers suspect the pit was not originally designed as a grave.

The researchers' theory of how the remains came to be there is that a small group of people, which included adult females and young children, was foraging in the vicinity of a residential camp, fishing and hunting birds and small mammals.

The scientists surmise that a pit dug within a house, was used for cooking or as a means of disposing of food debris for weeks or months preceding the death of the child.

The child died and was cremated in the pit, which was likely filled with surrounding soil soon thereafter. The house was soon abandoned, they concluded, due to the lack of artifacts found above the fill.

Scientists said that although burned, some of the child's remains may retain DNA, which would further broaden the scope of their discovery.