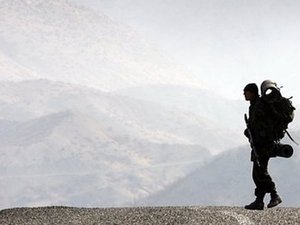 About 130 Kurdish rebels have been killed since March in military operations inside Turkey and neighboring Iraq, where the militants take refuge, a Turkish military official said Friday.

Intelligence obtained after a May 20 air raid on Kurdistan Workers' Party (PKK) hideouts in northern Iraq indicated that more than 100 militants of the group were killed, General Fahri Kir told reporters.

Adding that another 30 militants were killed in operations inside Turkey since the beginning of March, he said: "Therefore, it is understood that their losses are about 130 over the past four months."

Kir said at least five militants were killed in a small-scale incursion Wednesday into northern Iraq, backed by an air raid, in pursuit of rebels who had attacked border guards in the province of Sirnak.

The soldiers taking part in the cross-border operation returned to their bases the same day, he said.

Intercepted wireless communication between the rebels "shows that their losses are... about 20," the general, who heads the department of internal security operations, told a press conference.

He added that 43 members of the security forces had been killed since the beginning of March.

The PKK, listed as a terrorist group by Turkey and much of the international community, has stepped up violence in recent weeks, mainly in the country's predominantly Kurdish southeast, following a winter lull.

The rebels also declared an end to a unilateral ceasefire -- in place since April 2009 -- against Turkey on June 1.

Kir said the PKK were trying to increase their attacks and spread them to areas outside the southeast, their usual theatre of operations, in a bid to solidify control over its forces and pressure the Ankara government to accept them as an interlocutor.

"Our evaluation is that the separatist terrorist organization will continue to intensify its attacks until it believes it has created the image that it has sufficient influence over its grassroots and public opinion, that it controls the process and has seized the initiative," the general added.

He vowed that the army would pursue the PKK "with determination and patience until the separatist terrorist organization is neutralized."

Some 45,000 people have been killed in the conflict since 1984 when the PKK took up arms against Ankara for self-rule in Turkey's mainly Kurdish southeast.(AFP)