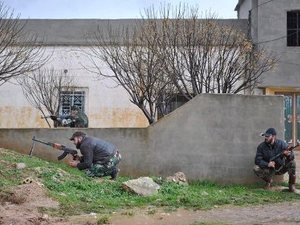 Hungary said two of its nationals were kidnapped in Syria on Saturday by unknown gunmen, adding that Budapest may dispatch agents to the region to collect further information.

"The Foreign Ministry and TEK (Hungary's Anti-Terrorism Center) confirmed that two men working in Syria were kidnapped on Saturday at dawn by unknown gunmen," said Peter Szijjarto, a spokesman for Prime Minister Viktor Orban, in a statement to MTI, the Hungarian state news agency.

"Hungary will look after its citizens who are in difficulties abroad ... Members of the Anti-Terrorism Centre are ready to get to the region as soon as possible to collect the necessary information."

Just a simple Question: HOW many Hungarians (specifically women and girls) are kidnapped in Hungary (Budapest) weekly? oh and not to mention that no one talks about it. Besides, Hungary "will look after its citizens who are in difficulties abroad..." is this because Hungary is taking good care of their citizens within the country... i wonder how many Hungarians are fleeing their country every single DAY!