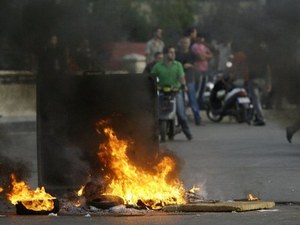 The rebel Free Syrian Army on Tuesday abducted 16 Lebanese men in the northern Syrian province of Aleppo who were on their way back from a pilgrimage trip to Iran.

A woman who was in the convoy told al-Jadeed: “After we crossed the Turkish-Syrian border, we were ambushed by gunmen from the Free Syrian Army in the Azzaz area. They forced the men to dismount the buses and took them to an unknown destination and left us there.”

Al-Jadeed said women headed to a Syrian police station and that policemen reassured them that they have started negotiations with the kidnappers.

State-run National News Agency put the number of those abducted at 16 while Syrian media said an "armed terrorist gang" had kidnapped 11 Lebanese and their Syrian driver.

"My two brothers-in-law were among about 12 people kidnapped by the Free Syrian Army in Aleppo as they were heading back to Beirut on board a bus after visiting religious sites in Iran," said one man who refused to give his name.

"The women who were with them were allowed to go free," he told Agence France Presse.

The man was among family members of those detained and hundreds of supporters who gathered on Tuesday afternoon in the Beirut southern suburb of Bir al-Abed to demand their release.

Meanwhile, protesters blocked roads in the Beirut southern suburbs of al-Kafaat, Bir al-Abed, Shatila and al-Msharrafiyeh in protest at the kidnap.

Roads were later reopened after Hizbullah chief Sayyed Hassan Nasrallah urged calm in a televised speech and called on protesters to leave the streets.

The brother of one of those kidnapped said the Free Syrian Army had vowed to release the men in exchange for FSA members detained by Syrian authorities.

Prime Minister Najib Miqati’s office said he was making the necessary contacts to ensure the release of the Lebanese abducted.

"Prime Minister Miqati has urged families of the kidnapped to remain calm and assured them he was following the issue closely to ensure the safety of those kidnapped and their quick release," a statement said.

One man who refused to give his name said his two bothers-in-law were among those abducted.

"They were heading back to Beirut on board a bus after visiting religious sites in Iran," said the man. "The women who were with them were allowed to go free."

The brother of Abbas Shaayb, who organized the pilgrimage, said the women were staying in a hotel in Aleppo.

"Let's see what the friends of the Free Syrian Army in Lebanon are going to do now," said the man, referring to the Sunni-led opposition in Lebanon that has backed the 14-month uprising in neighboring Syria.

The reported kidnappings were sure to further inflame sectarian tensions in Lebanon over the Syrian crisis.

Clashes between the pro- and anti-Assad camps in the country have left some 12 people dead in the past 10 days.

Nasrallah said it was necessary for all Lebanese to remain calm.

"The atmosphere is tense because of the events of recent days," he said. "Everyone is urged not to make matters worse."

Now what? I guess if you don't go to the fight, it will come to you.

this must really feel bad! :)
for years the syrian regime has been abducting our guys, and m8 were happy about it, and now ...:)
life is a bitch, is'nt it m8? what goes around comes around...
although I am against any abduction of any lebanese citizen.

More Hezbollah mercenaries, hopefully about to meet a just and well deserved end.

yes, perfect timing...so perfect that it is even suspicious

Hizballah will very soon order the kidnapping of some Syrian refugees to trade.

They are trying to drag Lebanon into this war by making the different religion factions fight each other.
I hope the Lebanese are smart enough and ignor stupid provocative actions, look at the bigger picture and resist Lebanon from going into the new evil plan for the middle east by staying peacefull!

No cedar, the Lebanese aren't smart enough to avoid it. Let's be honest, the non-shias have been living with a constant threat since 7 may. Opportunities will be seized for sure...

not to mention the assasination of hariri and the 4 suspects being free under our nose.

throw the politicians in the sea

Injustice is really bad indeed. At least, thanks to the FSA, syria will be a shia-free country, it's fortunate for them because we saw what they did and keep doing to lebanon.

And how do we know this is not another plot by the syrian government to drag us into his war? these could easily be syrian soldiers posing as free syrian army... all it takes is good acting... we know well how machiavelic assad is!! and we have enough stupid people who would fall into this trap and start fighting

and what about my pilgrimage to the cedars

It's time to kidnap 36 Saudi tourists from Maameltein.

If they are innocent, then they should be let go ASAP but if proven without a shadow of a doubt that they are supporting the butcher Assad then...bye bye ya helween...

Who the hell cares? The FSA should take all shites in lebanon to syria and there they can fight as much as they like. Lebanon is christian.

Yeslam timmak for daring to say it like it is.

Slash 99% of them are. Any so called christian who gets offended by the FACT that lebanon is a christian land is not a christian!!!

Are you sure it is not jewish land? I didn't see any christians ran to help you when you were being slaughtered.

Tell Hariri order his FSA comrade thugs to release these innocents or he won't send them anymore guns.

The timing of the incident is too perfect to be just a conincidence with whats's already going on in Lebanon. I am glad that the leaders of those idiots on the streets called them to go home and stop the rallies.

As Many are saying, it is clear that we are being dragged into a shia/sunni strife.

However, Lebanon and it´s people as a whole will not be dragged into this. The reaction of most politicians is calming which is a good thing.

I think the most usefull thing to happen now would be holding the border with Syria, which would need a miracle to happen I know.

Another Miracle needing issue is Beirut. declear it a weaponfree city. Hizb. Would benefit from it. Move out all your weopons and put them in the south.

Work on the same thing for Tripoli later ( with the credibility gained by declaring (and implementing) Beirut a weaponfree city).

If true, this is outrageous. The FSA should not be in the business of kidnapping, much less kidnapping unarmed pilgrims. It is supposed to be a defensive military body. There is nothing defensive about bringing harm to innocent pilgrims.

In fact, it is offensive and stunts like this can cost the FSA and the Syrian Opposition its credibility and legitimacy.

I guess kidnapping Syrians in lebanon, including ones leaving the airport, returning activists to syria to face death will from now on come with a price. What goes around comes around.

why the media is inflaming retoric between sunni and shia? if naharnet dont know that the free syrian army has nothing to do with this problem , then u are not following the news or like aoun ur job is to inflame the rift between sunni/shia, u think it will help u at the end?

For all the peaceloving people out there spread this article out:

IF you have a more trustable source please share it.

Slash and FT seems you are after each other like a married old couple.

it could also be a scenario from the syrian gvt to sow chaos in lebanon... The FSA is asking for an exchange of their members in jail against these poor lebanese.
but it could also be a lie by assad ...who knows?

so much hatred in all the comments...
i wonder where it all went wrong with this new generation...
i don't blame you, i blame your parents...
your parents were obviously traumatized from the civil war and not smart enough or brave enough to understand what went wrong so they were not able to raise you right...
Shame on your parents...

Travel ban to Syria would be more than wellcomed. Question is if there is any interest from the government or any other political group to issue such a ban.

My take: Syrian regime kidnapped these Shiites to inflame sectarian tensions in Lebanon. They could use Hezbollah's firepower against the Sunnites right now while they still have a chance.

It's unfair to accuse the Syrian free army of kidnapping because they have denied it. The Assad regime has every reason to flair the situation in Lebanon to deflect attention from his regime's weakness. This regime was doing this incessantly in lebanon during the civil war and is expert at conniving the truth.

1. For years Hizbollah kidnapped people and kept them in misery for years. Now they are frowning over 13 so-called pilgrims. They are far from it they are Hizbullah fighters.

2. When Hizbullah sends fighters to Syria they are meddling in Syrian affairs. They are killing innocent syrians in Homs Idlib Hama ...etc. The Lebanese government is held accountable and responsible for the actions of Hizbullah. The same way it was responsible and accountable for Fatah actions in 30 years ago.

3. If the Lebanese government is scared to enforce its legitimacy over Hizbullah, then this government should resign immediately.

4. We free Syrians, are both Syrians and Lebanese citizenship. Hizbullah wants us harm we do its citizens harm. Bashar and Nasrallah will go down even if we have to start a second civil war in Lebanon which is coming soon.