Berri: Security Agreement with France Won't Be Adopted Without Lebanon's Definition of Terror 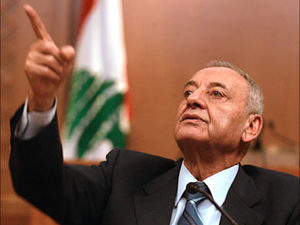 Speaker Nabih Berri has warned that a security agreement with France would not be adopted unless the Lebanese definition of terrorism was included in it.

"Lebanon defines terrorism differently than France. We believe Israel is the heart of terror and those who help it and support the occupation of Arab land … contribute to terrorism as well," Berri told An Nahar in remarks published Wednesday.

"We either add the definition of terrorism based on the Lebanese understanding or we cancel the clause," the speaker said. "Or the entire agreement would not be adopted."

A meeting of joint parliamentary meetings on Tuesday was postponed after a quarrel between Hizbullah and March 14 MPs over the security agreement and the definition of terror.

Berri denied rumors that MP Walid Jumblat's proposals on granting civil rights to Palestinians will not be discussed during a parliamentary session on Thursday.

"Tomorrow's session is on and this is what I have announced a month ago," Berri said. "I didn't call for its postponement."

"There are 13 suggestions including 4 that have not been amended so far and are on the agenda" of Thursday's meeting, he said.

"The civil rights of Palestinians … should not be shoved into internal political bickering and the entire parliament should be responsible," he told An Nahar.