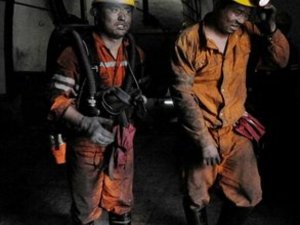 The death toll from a coal mine blast in China has risen to 30, officials said Monday, as hopes faded for seven miners still trapped -- prompting anger from web users wishing for a Chile-style rescue.

Saturday's accident in the central province of Henan was the first major incident in China's notoriously dangerous mines since the dramatic rescue last week of 33 miners trapped for more than two months in Chile, watched worldwide.

In the city of Yuzhou in Henan, rescuers pulled more bodies out of the dank coal pit early Monday, bringing the death toll to 30, with seven others still unaccounted for, the State Administration of Work Safety said in a statement.

Rescuers said Sunday there was little hope of finding any more survivors in the colliery, and that it would likely take several days to find those still missing.

Du Bo, the deputy director of the rescue operation, said the missing miners were likely buried in the more than 2,500 tonnes of coal dust that smothered the pit after the gas blast.

A total of 276 miners were at work below ground when the disaster happened, and 239 managed to make it to the surface, the national work safety agency said.

Independent labour groups say the actual number of mine deaths last year is likely much higher than the seven people a day estimated by the government.

The government has repeatedly vowed to shut dangerous mines and increase safety, but the accidents continue with regularity as mines hustle to pump out the coal on which China relies for about 70 percent of its energy.

On the Internet, reaction has been swift and bitter -- with many making unfavorable comparisons to the situation in Chile.

"The Chilean miracle has signed the death warrant of the mine safety system in China," one user using the screen name Xiaodaoren wrote on sina.com's popular Twitter-like microblogging service.

"If we don't fundamentally resolve these mine security issues, the accidents will not stop and we will be unable to avoid the deaths and injuries."

Another, named Cheng Jing 33, wrote: "The difference with Chile is enormous. The mines here are not inspected enough and poorly managed."

And Yunfeng Tongxue added: "The Yuzhou miners are not as lucky as those in Chile."

Chilean President Sebastian Pinera offered to help China, saying during a visit to London that his country had learned from the San Jose mine disaster.

Chen Jiaguo, a miner who escaped the blast, told the Beijing News that safety zones in the mine were mostly filled with debris -- not survival equipment and basic necessities.

"There was no rescue equipment in the tunnels, no food or water and most of the time, the safety zones were filled with scrap metal and debris," the paper cited Chen as saying.

"Other than that, the ventilation fans were not strong enough and did not ventilate the air enough."

In an editorial on Monday, the state-run newspaper said China's efforts were not good enough.

"If we cannot in the shortest amount of time possible build emergency rescue systems in our mines and give miners a chance to live... then more and more miners are going to be placed in harm's way," it said.

To satisfy that requirement, a deputy chief engineer was in the Yuzhou mine at the time of the explosion and helped evacuate miners, the China News Service reported.

China had its own "miracle" mine rescue in April when 115 miners were rescued after more than a week trapped underground in a flooded mine shaft in the northern province of Shanxi.(AFP)