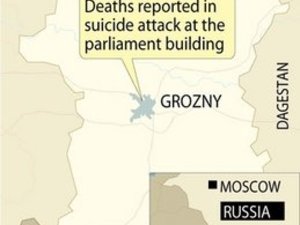 One group of insurgents set off an explosive device at the entrance of the parliament complex in Grozny, while two others ran into the building, sparking a shootout with police, RIA Novosti reported, citing a law enforcement source.

A separate group of attackers stormed the Ministry of Agriculture building, where they are fighting off police, Itar-Tass reported, citing a ministry source.

There have been no reports of hostages.

Interfax reported shots in the office of the parliament's speaker, Dukuvakh Abdurakhmanov, but later said that he had been safely evacuated.

The Russian interior ministry declined to confirm reports of the shootout. Russian Interior Minister Rashid Nurgaliyev is in the Chechen capital and holding talks with Kadyrov about violence in the region.

Restive Chechnya in the Russian North Caucasus has been battling an Islamist insurgency for years despite the iron rule of its Moscow-backed president, Ramzan Kadyrov.

Russia fought two wars with Chechen separatists in the 1990s before finally installing a loyal government there in 2000.

Since then, most of the Islamist insurgents have moved over into the neighboring Russian republics of Dagestan and Ingushetia, with terrorist attacks seldom striking at the heart of Grozny in recent years.

But in August a shootout between Kadyrov's security service officers and suspected insurgency left 19 people dead, including 5 civilians, in his home village of Tsentoroi, raising fears of a reviving insurgency.(AP)