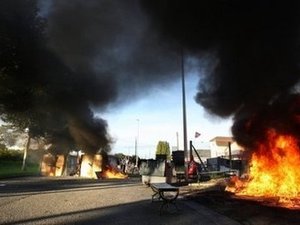 French high school students clashed with riot police Monday, truckers blocked roads and filling stations ran out of fuel as protests escalated against plans to raise the retirement age to 62.

Police fired tear gas at youths who set a car on fire, smashed bus stops and hurled rocks outside a school in a Paris suburb blocked by students protesting against a move that is central to President Nicolas Sarkozy's reform agenda.

Youths threw petrol bombs at police outside a school in the Paris suburb of Combes-la-Ville, and a man appeared briefly among the protestors to brandish a rifle at officers before melting back into the crowd, police said.

Gas was also used against student protests in the eastern towns of Mulhouse and Montbeliard, while in Lyon hooded youngsters looted a fast-food cafe and burned at least three cars they overturned during clashes with riot police.

Meanwhile, truck drivers also joined the movement that has brought millions onto the streets in recent weeks. Another day of mass strikes and nationwide protest rallies is planned for Tuesday.

Half of all flights to and from Paris Orly airport and 30 percent of flights at Roissy-Charles de Gaulle and other French airports will be canceled due to Tuesday's strikes, aviation officials said.

Sarkozy held the latest in a daily series of meetings on how to deal with the protest movement before the government announced it had activated an emergency crisis cell charged with maintaining fuel supplies.

Labor wants to force Sarkozy to abandon a bill to raise the minimum retirement age to 62, which is in the final days of its journey through a parliament in which the right-wing leader enjoys a comfortable majority.

Sarkozy has staked his credibility on the reform, but unions are hoping for a repeat of 1995, when then president Jacques Chirac backed down on pension reform after a lengthy transport strike that paralyzed France.

Most French back the current protest movement, with a poll published Monday in the popular Le Parisien daily showing that 71 percent of those asked expressed either support for or sympathy with the anti-reform protests.

Truckers staged go-slows on motorways near Paris and several provincial cities, and drivers blocked access to goods supply depots and joined oil workers blocking fuel depots to defend their right to retire at 60.

With 11 out of France's 12 oil refineries shut down by strike action, and many fuel depots blocked by pickets, panic buying led to a 50 percent jump in petrol sales last week.

Around 1,500 petrol stations on the forecourts of French supermarkets had run out of fuel by Monday, their industry association said.

Some 4,500 of France's 12,500 filling stations are attached to shopping centers, and they are the country's busiest, supplying 60 percent of the fuel used by French motorists.

Oil workers maintained their pickets or threw up new ones outside fuel depots were determined to keep up their blockades.

"We will stay here as long as we can," said the CFDT union's Joseph Sieiro, one of the hundred people, most of them truckers, who turned up on Monday morning to block an oil terminal at Port-La-Nouvelle in southern France.

Unions slammed management's reopening of a crucial pipeline bringing fuel to Roissy-Charles de Gaulle airport in Paris, which officials warned could have run empty as early as Monday, saying untested fuel was flowing to planes.

Unions have said their protests may not end even after the pension reform is passed by the Senate this week.

The opposition Socialists again denounced Sarkozy and Prime Minister Francois Fillon for failing to engage in dialogue over the reforms.

"We have a prime minister who thinks he is Churchill but who is only Thatcher," said the party's number two, Harlem Desir, referring to Britain's revered wartime leader and its 1980s Conservative premier.

"He is trying to make us think he is carrying out great reforms to save our economy but in fact he is smashing our social model."(AFP)