Qaouq: We Will Not Allow STL to be Used to Achieve Goals of July War 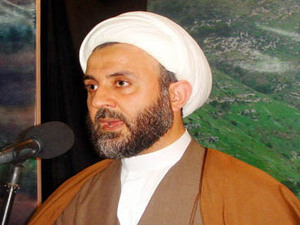 Hizbullah official Nabil Qaouq stressed Monday that the Resistance “cannot allow the Special Tribunal for Lebanon to be used to achieve the goals of the July 2006 war.”

He said that the Resistance had raised the tone of rhetoric in order to avoid the dangers threatening Lebanon and the region, adding that it is in a strong position on the internal and external fronts.

“The American project wants to infiltrate Lebanon and the region once again through the STL and place Lebanon on a new course of danger, strife, and division to meet the Israeli assault,” Qaouq stated.

“The truth was the STL’s first victim when it wrongfully accused the four generals, Syria, and Omar Karami’s government,” he said.

“All facts will be revealed and the people will realize that not only was Israel ruled out as possibly being behind Hariri’s assassination, but that the STL had based its indictment on Israeli information,” Qaouq continued.