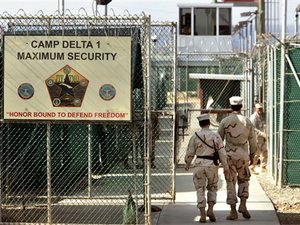 The United States held hundreds of inmates who were either totally innocent or low-risk for years and released dozens of "high-risk" Guantanamo inmates, according to leaked classified files.

The new leaks reveal that inmates were held without trial on the basis of often seriously flawed information, such as from mentally ill or otherwise unreliable co-detainees or statements from suspects who had been abused or tortured, The New York Times reported.

The Times was among a group of U.S. and European media outlets that also included The Daily Telegraph, NPR, El Pais, Le Monde, Der Spiegel and La Repubblica to receive 779 documents from the whistle-blowing website WikiLeaks.

At least 150 were innocent Afghans or Pakistanis, including drivers, farmers and chefs, who had been rounded up as part of frantic intelligence-gathering in war zones and were then detained for years due to mistaken identity or simply for being at the wrong place at the wrong time, according to The Daily Telegraph.

The British daily said that overall, U.S. military analysts considered only 220 of the people ever detained at Guantanamo to be dangerous extremists.

Another 380 of the suspects in the George W. Bush-era "war on terror" were deemed to be low-ranking foot soldiers that traveled to Afghanistan or were part of the Taliban, the Telegraph reported.

In dozens of cases, senior U.S. commanders were said to have concluded that there was "no reason recorded for transfer" to the US naval base in southeastern Cuba.

Officials at Guantanamo were aware in at least two cases that they were holding innocent men behind bars and even acknowledged that in writing in their prison files, and yet it still took months for them to be returned to their home countries, according to the public radio station NPR.

Meanwhile, about a third of the 600-some men who have been transferred to third countries were branded "high-risk" before being released or handed to other governments, The New York Times noted.

Of the 172 prisoners who remain at Guantanamo, 130 have been rated as posing a "high-risk' threat to the United States and its allies.

In a troubling revelation for the United States and its allies as they seek to back anti-government forces in Libya who are fighting to oust longtime strongman Moammar Gadhafi, the documents showed one of the rebels' presumed trainers has closer ties to al-Qaida than previously thought.

Abu Sufian bin Qumu was engaged in violent extremist activities for two decades, previously training at two al-Qaida camps, fighting with the Taliban against the Soviet Union and the Northern Alliance and serving as al-Qaida leader Osama bin Laden's driver in Sudan, according to NPR.

The Times said the files, which detail the background of each of the 779 people who have passed through the prison facility since 2002, revealed little about harsh interrogation tactics used at Guantanamo, including sleep deprivation and simulated drowning, that sparked widespread condemnation around the world.

According to the paper, the best-documented case of an abusive interrogation at Guantanamo was the coercive questioning in 2002 and 2003 of Mohammed Qahtani, a Saudi believed to have been a participant in the September 11, 2001, plot.

Qahtani was leashed like a dog, sexually humiliated and forced to urinate on himself, the paper said.

"Although publicly released records allege detainee was subject to harsh interrogation techniques in the early stages of detention," Gahtani's file noted, his confessions "appear to be true and are corroborated in reporting from other sources."

However, a number of other prisoners were said to have made false claims of torture.

He was said to have ordered a one-time Baltimore resident around March 2002 to wear a suicide bomb vest and perform a "martyrdom" attack against then Pakistani president Pervez Musharraf.

But in the end, the assignment turned out to simply be a test of Majid Khan's "willingness to die for the cause."

President Barack Obama's administration, which has struggled to shutter Guantanamo, denounced the "unfortunate" release of the classified documents, part of a massive cache of secret memos leaked to WikiLeaks last year.

In a statement, the government said the Obama and Bush administrations had "made every effort to act with the utmost care and diligence in transferring detainees from Guantanamo."

"Both administrations have made the protection of American citizens the top priority, and we are concerned that the disclosure of these documents could be damaging to those efforts," the statement added.