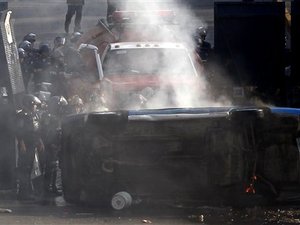 Mexican police on Monday freed 51 people who had been kidnapped in the northeast of the country, including 18 Central American and six Chinese migrant workers, the public security ministry said.

The raid on a building in the northeastern town of Reynosa near the U.S. border -- where rival drug cartels battle it out for lucrative trade routes to the north -- uncovered 14 Guatemalans, two Hondurans and two Salvadorans.

The other 27 detainees were Mexicans, the ministry said in a statement.

The statement did not mention any arrests during the operation.

Four policemen were detained on Monday in connection with the earlier release. Those who were rescued said they had been kidnapped when gunmen from the Gulf drug cartel hijacked the buses they were traveling on.

Reynosa is around 160 kilometers away from the town of San Fernando, where police have unearthed 177 bodies buried in unmarked graves.

Officials said the total probably includes 122 passengers from a bus that was commandeered near San Fernando, and have blamed the killings on the Zetas drug cartel, now in a bloody dispute with the Gulf, its former ally.

San Fernando was the same municipality where the Zetas last year kidnapped and slaughtered 73 immigrants from Central and South America on their way north to try to illegally cross into the United States.

Mexico has been convulsed by drug violence since the government launched a major military assault on the cartels in 2006, with some 34,600 people killed in shootouts among rival cartels and security forces.