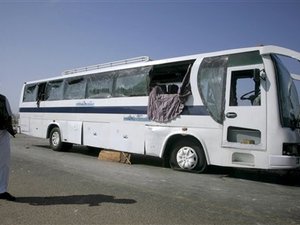 Bombs planted by the roadside tore through two Pakistani navy buses taking employees to work on Tuesday, killing four people and wounding more than 50 others.

Islamist militants have staged repeated attacks on security forces and other state targets in recent years. Allied with or inspired by al-Qaida, they are seeking to overthrow Pakistan's U.S.-allied government or force a halt in army offensives against their safe havens in the northwest close to Afghanistan.

Karachi, the economic heart of the nation and the home of the Pakistan navy, has not been spared.

Police said the bombs were concealed by the side of the road, and were presumably detonated by remote control.

The victims included naval officers and employees of the force, said Ali, adding one of the dead was a female doctor.

Islamist terrorism in Pakistan began in earnest after the U.S.-led invasion of Afghanistan in 2001, which caused widespread anger in Pakistan and destabilized its border regions. The extremists began targeting the Pakistani state after it allied with Washington in its campaign against extremism.

Meanwhile, 14 people, among them women and children, were killed when fire ripped through a bus in southwestern Pakistan late Monday. Witness Abdul Hai said the bus in Baluchistan was attacked by gunmen who later set it on fire. Other officials were quoted in Pakistani media giving a similar account of the incident.

But police officer Sayeed Farid Shah said the bus caught fire due to an engine fault.

Baluchistan is wracked by separatist violence and civilians are often targeted, especially settlers from elsewhere in Pakistan. Information from the region is very hard to confirm, and transparent investigations are rarely carried out into violent incidents.