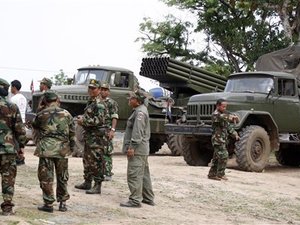 Hopes of an imminent ceasefire between Thailand and Cambodia faded Wednesday after Bangkok pulled out of talks with its neighbor and deadly border clashes entered a sixth day.

Cambodia's prime minister called for a truce in the bloodiest fighting between the two countries in decades, which has left 14 people dead and forced tens of thousands of civilians to flee cross-border shelling.

Talks aimed at ending hostilities had been due to take place in Phnom Penh on Wednesday, but Thai Defense Minister Prawit Wongsuwon called off the planned meeting with his Cambodian counterpart at the last minute.

Army spokesman Colonel Sunsern Kaewkumnerd said the trip was put off after Cambodian media reported that Thailand had admitted defeat in the standoff.

"I will definitely talk with Cambodia but I don't want the public to think the decision to talk is a defeat for Thailand," Prawit told reporters before flying to China for a previously scheduled engagement.

The two nations traded fresh accusations over the breakdown in diplomatic overtures.

Eight Cambodian and five Thai troops have died in five days of heavy weapons fire along their shared border, prompting growing diplomatic pressure on the neighbors to end the conflict. Thailand said a civilian had also been killed.

"Cambodia is appealing for a ceasefire," the premier said in a speech in the capital Phnom Penh, adding that he was ready to hold talks with his Thai counterpart at a regional summit in Jakarta in early May.

On Tuesday the fighting spread along the border to the 900-year-old Preah Vihear temple, which has been the focus of strained relations between the neighbors since it was granted U.N. World Heritage status in 2008.

That area had been relatively calm for two months and is 150 kilometers east of two other disputed temple complexes that have been the scene of fierce fighting since Friday.

In February, 10 people were killed near the Preah Vihear temple, prompting a U.N. appeal for a permanent ceasefire.

The neighbors agreed in late February to allow observers from Indonesia into the area near Preah Vihear.

But the Thai military has since said the monitors are not welcome and they have not been deployed.

Hun Sen said the Preah Vihear dispute had to be resolved through third-party mediation because the issue was already in the hands of the United Nations Security Council and the 10-member Association of Southeast Asian Nations.

But the premier said he was open to bilateral talks about the two temples at the center of the current clashes.

The World Court ruled in 1962 that the temple belonged to Cambodia, but both countries claim ownership of a 4.6-square-kilometre (1.8-square-mile) surrounding area.

Cambodia has accused Thailand of using spy planes and poisonous gas in the recent fighting -- which Bangkok has strongly denied.

The fighting comes at a sensitive political time for Thailand, with Prime Minister Abhisit Vejjajiva preparing to dissolve the lower house of parliament for elections he has said will be held by early July.

Abhisit said on Tuesday that the clashes would not derail his polls plan.