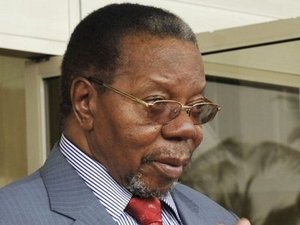 Malawi has declared Britain's top diplomat to the southern African nation persona non grata after his criticism of the president was leaked to the press, diplomats said Wednesday.

"I am sorry to pass on the news that the Malawi Government has officially informed the Foreign and Commonwealth Office today (Tuesday) that Fergus (Cochrane-Dyet) is being declared persona non grata," British high commission vice-consul Lindsay McConaghy wrote in a memo, a copy of which was seen by Agence France Presse.

The row revolves around a leaked cable in which Cochrane-Dyet said Malawian President Bingu wa Mutharika was becoming "ever more autocratic and intolerant of criticism."

In the diplomatic cable, published by the weekly Nation earlier this month, the high commissioner also said that "the governance situation continues to deteriorate in terms of media freedom, freedom of speech and minority rights."

McConaghy's memo said that "there will be serious consequences for Malawi" for its treatment of the high commissioner, the equivalent of ambassador in Commonwealth countries.

However, Malawi officials on Wednesday remained mum on the expulsion of the diplomat.

Top officials at the foreign ministry, where Cochrane-Dyet was first grilled last week and threatened to be declared persona non grata, refused to comment.

But a senior official at the information ministry, who refused to be named, told AFP: "The truth is that the envoy has been expelled, but everyone is afraid to comment because the decision to expel the British envoy came from State House and not from the Office of the President and Cabinet."

He added: "Nobody wants to burn his or her fingers or to be seen contradicting the president. Everybody is afraid to speak."

The official said information he had received from the British high commission was that Cochrane-Dyet was "actually preparing to leave the country and the embassy here is waiting for a statement from the Foreign Office in London."

Although his government had earlier threatened to expel Cochrane-Dyet, Mutharika had appeared to be trying to end the spat last week when he thanked Britain for its "steadfast" support of its former colony.

Malawi gained its independence from Britain in 1964 and London remains the biggest bilateral donor to the impoverished nation, where half the 13 million citizens live below the poverty line and on less than a dollar a day.

Britain is Malawi's main bilateral donor but it slashed aid by £3 million (3.4 million euros, $4.9 million) to the southern African nation last year after expressing concern at the government's purchase of a $13.26 million presidential jet.

Malawi, which depends on donor support for up to 40 percent of its development budget and salaries for 169,000 civil servants, said the new jet was cheaper than hiring a plane every time the president traveled abroad.

Malawi has recently drawn criticism from donor countries, including Britain, over a new law that allows publications to be banned.