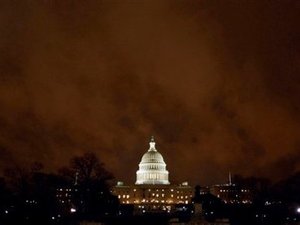 The severe weather killed 128 people in Alabama on Wednesday alone, authorities said, and President Barack Obama said Washington would be rushing search and rescue assistance to the battered southeastern state.

States of emergency were declared in Alabama, Arkansas, Kentucky, Mississippi, Missouri, Tennessee and Oklahoma, and governors called out the National Guard to help with rescue and cleanup operations.

The National Weather Service (NWS) had preliminary reports of more than 300 tornados since storms began Friday, including more than 130 on Wednesday alone.

Alabama was especially badly hit, caught by two lines of storms and an evening tornado that tore through the city of Tuscaloosa, home to the University of Alabama.

Tuscaloosa Mayor Walter Maddox told CNN that the tornado had "obliterated blocks and blocks" of his city.

"My wife and I were watching the weather coverage until the monster was right up on us," Tuscaloosa resident Will Nevin told The Birmingham News, the local newspaper.

"Then it was the mad dash to the bathroom where the lights flickered, pulsed and finally gave up."

A tornado also struck the city of Birmingham and officials were still assessing the damage.

"This has been a very serious and deadly event that's affected our state, and it's not over yet," Alabama Governor Robert Brantley told reporters after the second string of storms.

The NWS issued a rare "high-risk" warning of tornados, hail, flash flooding and dangerous lightning for parts of Alabama, Georgia and Mississippi.

It warned that severe weather could also strike 21 states from the Great Lakes down to the Gulf Coast and across to the Atlantic, and tornados were reported as far east as Virginia and Maryland.

Storm victims across the region were trapped in homes, trailers and cars by falling trees. Hail the size of golf balls cracked windows.

Roads were washed out or rendered impassable by fallen trees and power lines across the region. Homes, schools and businesses were flattened, flooded and set on fire by lightning.

"We stand ready to assist any community in need, and we urge Kentuckians to remain on alert until this storm system finally passes."

Hundreds of people were evacuated from their homes in Missouri after levees failed to hold back swollen rivers.

"I'm just glad my family is safe," said Chris Pigg, who spent the night at a shelter with his wife and daughter and wasn't sure if he'd have a home to return to after the Black River breached the levee in Poplar Bluff, Missouri.

The death toll was set to rise as skies are not expected to clear until late Thursday or Friday, and there will be little time to mop up, as another major storm system is forecast to bring heavy rain and high winds on Saturday.

The storms come after a wet spring and a winter of heavy snowfall which left the ground saturated and rivers running high.

Officials were considering deliberately destroying levees in some areas to ease pressure on swollen rivers, some of which are so high that barges have become trapped under bridges.

As much as 45 centimeters of rain had fallen from Saturday through Tuesday night in some areas.

"It's producing major to record flooding in a lot of those river basins," said Jim Keeney, deputy chief of the weather service's central region.

In the Gulf coast state of Mississippi the storm killed 32 people and caused damage in 50 of its 82 counties, according to Greg Flynn, the spokesman for the state's emergency management agency.

He said most of the deaths and damage were caused by tornados and high winds.

State officials reported 11 dead in Arkansas, nine killed in Georgia and another three killed in Missouri and Tennessee, with the overall toll likely to rise.

"There's trees down, the power's down, you've got homes that are damaged... as well as a lot of flooding going on," Renee Preslar, a spokeswoman for the Arkansas department of emergency management, told Agence France Presse on Wednesday.

Officials across the country begged people to use common sense and not to try to drive or walk through the floodwater.

"Some people are still trying to drive around barricades with their cars. Please don't do that," Louisville, Kentucky Mayor Greg Fisher said at a press conference.

"If it's moving fast you can go with it."