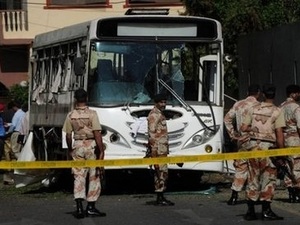 Three people were killed and 15 others wounded Thursday when a bomb hit a bus ferrying Pakistani naval officials to work in the port city of Karachi, the third such attack in days, Agence France Presse reported.

The bomb was planted on the roadside in busy Faisal Avenue and detonated remotely as the bus drove past in Pakistan's politically tense economic capital, used by NATO to ship supplies to troops in Afghanistan.

"A bomb planted on a roadside exploded when a Pakistan navy bus was passing by," provincial government official Sharfuddin Memon told AFP.

"A pedestrian was killed and 15 others were wounded," Memon added.

A navy spokesman said two sailors were killed, discounting initial reports that a woman doctor and officer had died.

"Two sailors were martyred in the bomb blast and nine other naval personnel were wounded," Commander Salman Ali told AFP.

About three kilograms of explosives were packed into the bomb which was detonated remotely, senior police official Iftikhar Tarar said.

He said the blast appeared to be the work of the same group behind twin bombings on Tuesday that killed four navy officials and wounded nearly 60 people in the worst attack on military officials in Karachi in years.

Authorities had blamed extremist Islamist organizations linked to the Taliban and al-Qaida, such as Lashkar-i-Jhangvi, which was involved in the Karachi kidnap and beheading of U.S. journalist Daniel Pearl in 2002.

The rare attacks on Pakistan's navy came just days after army chief General Ashfaq Kayani claimed the military had "broken the back" of Taliban and al-Qaida-linked militants despite U.S. criticism to the contrary.

Bomb attacks across Pakistan have killed more than 4,240 people since July 2007, and the United States considers Pakistan's northwestern border areas with Afghanistan the global headquarters of al-Qaida.