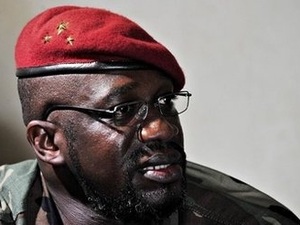 He died after his top aide said Coulibaly's troops were waiting for U.N. peacekeepers to disarm them.

A commander for Defense Minister Guillaume Soro said Coulibaly appeared to have killed himself rather than surrender when his troops seized Coulibaly's stronghold in Abidjan's poor neighborhood of Abobo on Wednesday night.

The senior commander spoke on condition of anonymity and it was not possible to get details late Wednesday of how exactly Coulibaly, 47, died.

"Chief Sergeant Ibrahim Coulibaly has been killed this evening during fighting with the FRCI" Republican Forces of Ivory Coast, state television announced in a late-night headline running at the bottom of the TV screen.

But the senior commander who directed the fighting against Coulibaly said it appeared to be a suicide.

"Our men surrounded his residence but he refused to surrender," said the commander who spoke on condition of anonymity because he is not authorized to speak to reporters. "When our fighters got access, they found his body, lifeless but with no bullet wound."

Coulibaly spokesman Felix Anoble said earlier Wednesday they were attacked while waiting for U.N. peacekeepers to arrive and disarm them.

Reached after news of his death, Anoble told the AP he could "confirm nothing, I have no information."

Ouattara on Friday had ordered Coulibaly and his forces to disarm or expect to have weapons seized by force. Coulibaly said that disarming would take time to organize. He pledged his allegiance to the new president in an interview with The Associated Press, but has not been received by him.

"Our positions were attacked this morning by Republican Forces (FRCI) while our soldiers had met to wait for disarmament overseen by the U.N.," Anoble said.

Brig. Gen. Michel Gueu, the military adviser to Ouattara's Prime Minister Guillaume Soro, said Tuesday he met with a Coulibaly delegation to advise they to disarm.

"We're here to bring a verbal message from the president and the prime minister who ask that IB deposes his arms," he said, adding that it was a prerequisite to meeting with the two leaders.

Coulibaly had said eh considered Ouattara "like a father," since he led the bodyguard of Ouattara's French wife from 1990 to 1993, when he was an army chief sergeant and Ouattara was prime minister.

On Monday, Coulibaly's aides accused Soro's camp of attacking their forces. The two men have a years-old feud.

Soro's men did not reach Abidjan until April.

The rivalry between Soro and Coulibaly was the biggest challenge to confront Ouattara's fledgling government since former strongman Laurent Gbagbo was arrested April 11.

Coulibaly had led a successful 1999 coup that installed Gen. Robert Guei, who was assassinated after elections in 2000. In 2002 Coulibaly helped lead a failed coup against Gbagbo and made no secret of his own presidential aspirations. Later that year, Coulibaly began the rebellion that divided Ivory Coast between a rebel-held north and government-run south.

Ouattara has little control over the former rebel forces that brought him to power and who will form the new Ivorian army by integrating with Gbagbo's old forces. The former rebels grouped loosely under Soro, who is also the prime minister, are commanded by five different warlords.

Coulibaly re-emerged in Abidjan in January at the head of the "Invisible Commandos" to start the battle against Gbagbo's forces after soldiers fired mortar shells and rockets into Abobo, a neighborhood that voted en masse for Ouattara.

The Nov. 28 elections were supposed to reunite the country, but Gbagbo's stubborn refusal to accept his defeat precipitated the most recent violence in a country in conflict for a decade. It is not known how many thousands have been killed and wounded.

Ouattara's government has appealed for residents to return to their normal lives in the West African nation.