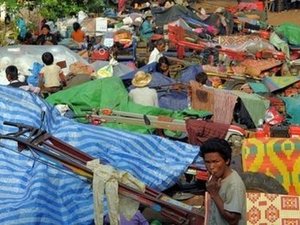 Thailand and Cambodia said Thursday they had agreed to end fierce fighting on their shared border after seven days of clashes that have left 15 dead, Agence France Presse reported.

"After discussions by the military on both sides this morning, there is a ceasefire agreement... border checkpoints will be reopened and villagers will start to return home," said Thai government spokesman Panitan Wattanayagorn.

Earlier on Thursday, Cambodian De fence Minister Tea Banh told AFP that a deal had been reached for an end to hostilities and for "soldiers to stay where they are".

Both countries have blamed each other for sparking the violence around two contested jungle temples -- the bloodiest fighting between the neighbors in decades -- which has displaced around 75,000 civilians.

Panitan said the negotiations were "amicable" and troops were confident that the truce could be implemented.

But he added: "The ceasefire agreement is preliminary and we have to wait and see how the situation on the ground develops."

One Thai soldier died on Thursday morning, bringing the total number of the country's troops killed since the fighting began last Friday to six, while eight have died on the Cambodian side.

Bangkok has said a Thai civilian has also been killed.

The neighbors had come under increasing international pressure to stop the violence.

A statement from European Union foreign policy chief Catherine Ashton on Wednesday called the conflict "very worrying" and echoed calls made by the U.N. Security Council in February for a permanent ceasefire.

The U.S. ambassador to Thailand, Kristie Kenney, on Thursday also urged a return to the negotiating table.

Talks had previously been due to take place in Phnom Penh on Wednesday, but were called off at the last minute by Thailand's defense minister.

Thai Foreign Minister Kasit Piromya was in Jakarta, chair of the Association of Southeast Asian Nations (ASEAN) regional bloc, on Thursday for talks with his Indonesian counterpart Marty Natalegawa. ASEAN had also urged the pair to reach a ceasefire.

Heavy weapons fire has caused an estimated 45,000 people in Thailand and 30,000 in Cambodia to flee the jungle frontier.

Cambodian mother-of-eight Chhem Lin was among the evacuees who have sought safety in the town of Samrong, some 40 kilometers (25 miles) away from the border unrest.

"I am so scared," the 46-year-old, whose husband is a soldier on the front line, told AFP before the ceasefire was announced. "They should not fight to resolve the problem."

The Thai-Cambodian border has never been fully demarcated, partly because it is littered with landmines left over from years of war in Cambodia.

On Tuesday the fighting briefly spread to the 900-year-old Preah Vihear temple, which has been the focus of strained relations between the neighbors since it was granted UN World Heritage status in 2008.

In February, 10 people were killed near the Preah Vihear temple, which is 150 kilometers east of the two other ancient temple complexes at the center of the latest clashes.

The neighbors agreed in late February to allow observers from Indonesia into the area near Preah Vihear. But the Thai military has since said the monitors are not welcome and they have not been deployed.

The World Court ruled in 1962 that the temple belonged to Cambodia, but both countries claim ownership of a 4.6-square-kilometer surrounding area.

Cambodia has accused Thailand of using spy planes and poison gas in the recent fighting -- an allegation denied by Bangkok.

The border clash came at a sensitive political time for Thailand; with the country's premier preparing to dissolve the lower house of parliament for elections he has said will be held by early July.