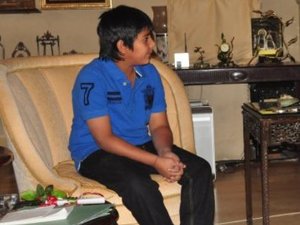 A 12-year-old boy has been crowned Maharaja of Jaipur, becoming head of what was once one of India's most glamorous and wealthy royal families, Agence France Presse reported.

In a grand marble hall, Kumar Padmanabh Singh was blessed by priests at the coronation ceremony before he walked slowly through the city palace to receive a military guard of honor.

Among his entourage of white-clad aides during Wednesday's rituals were two bearers armed with fly whisks and another carrying a decorated parasol to protect his head from the glaring sun.

Like all Indian royal titles, the Maharaja of Jaipur is no longer legally recognized after independence from Britain in 1947 and government reforms in the 1970s.

However many royal families are still venerated by locals in their former kingdoms, and they also remain in possession of some of their palaces, forts, jewelry and antiques.

Padmanabh Singh's grandfather, polo-playing Sawai Bhawani Singh, was hailed as "the last Maharaja of Jaipur" when he died two weeks ago because he had come to the throne shortly before all royal privileges were removed.

But the coronation in Jaipur -- a popular tourist destination known as the "pink city" -- proved that the family is keen to retain some sense of royal lineage.

The new maharaja, who looked nervous during the proceedings, was described by his tutor at the elite Mayo College as an ordinary boy performing well in classes and at sport.

"Padmanabh Singh has no airs of being a royal," Yash Saxena told the Calcutta Telegraph. "He is down to earth and has adapted very well. He mixes very well with all other students, and his classmates are very fond of him."

The schoolboy inherits a mixed blessing, with priceless properties in and around the city still controlled by the crown but also decades of family feuds and estrangements that have caused chaos over his legacy.

Padmanabh Singh's succession was itself controversial as he was legally adopted by his grandfather, the then maharaja, in 2002 to ensure the title would skip a generation due to a bitter family dispute.

One focus of the lawyers' attentions has been the fate of the stunning Rambagh and Jai Mahal palaces in Jaipur, which now operate as luxury "heritage hotels" set amid landscaped Moghul gardens.

The value of such assets has rocketed in recent decades, and a complex battle between multiple relatives has raged for years involving allegations of forged wills, alcoholism and marital breakdown.

The grand matriarch of the clan, Gayatri Devi, was a celebrated member of the international jet-set who was once named as one of the most beautiful women on Earth by fashion magazine Vogue.

She was accorded a royal funeral in Jaipur following her death at the age of 90 in 2009.