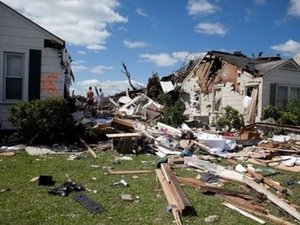 Shocked Americans struggled Thursday to grasp the magnitude of the worst U.S. tornadoes in decades, which carved a trail of destruction across the south, claiming at least 305 lives, Agence France Presse reported on Friday.

Communities like Alabama Governor Robert Bentley's home town of Tuscaloosa were virtually wiped off the map, and officials warned the body-count would rise as rescuers uncovered more dead in the debris.

Disbelief was written on faces across eight states crippled by the ferocious spring storms -- the deadliest tornado tragedy to strike the United States since 310 people were killed on April 3, 1974.

Recalling the more recent horror of 2005's Hurricane Katrina, families picked through the remains of homes, businesses and schools, bearing witness to scenes of devastation more common in war zones or after earthquakes.

In Alabama alone the toll reached 204, with more than 1,700 injured. President Barack Obama and the First Lady were to travel to the worst-hit state on Friday for a first-hand look at a still unfolding human tragedy.

"The loss of life has been heartbreaking, especially in Alabama," Obama said at the White House, describing the disaster as "nothing short of catastrophic."

The storms "took mothers and fathers, sons and daughters, friends and neighbors -- even entire communities," he said, vowing to rush federal assistance to those in need.

States of emergency were declared from central Oklahoma to Georgia on the eastern seaboard, and governors called out the National Guard -- including 2,000 troops in Alabama -- to help with the rescue and clean-up operations.

"We had a major catastrophic event here in Alabama with the outbreak of numerous long-track tornadoes," said Governor Bentley, who declared a major disaster for the state, where up to a million people were left without power.

As the long day dragged on, rescue workers battled to find missing people and to try to rescue survivors still trapped in the debris of their homes.

Many homes looked like they had been blown inside out, with the walls down and furniture spilling into the street.

In a parking lot at the University of Alabama in Tuscaloosa -- where 36 people were confirmed dead -- tornadoes left behind 20 smashed cars, many of them piled on top of each other.

"I don't want to think now in how much I lost," resident Robert Mitton told AFP. "I hope we can get some help from the government. I live very close, my house is damaged, but my family is fine."

Owen Simmons, who works in a furniture store, pointed to a black cross and a zero below painted on the side of his house.

"It means that the rescue team has already checked my home and they found no victims. That's what really matters."

"When you look at this path of destruction, likely five to seven miles (eight to 11 kilometers) long and half a mile to a mile wide, I don't know how anyone survived," he said. "There are parts of this city I don't recognize."

The overall toll includes 34 deaths in Tennessee, 33 in Mississippi, 14 in Georgia, 12 in Arkansas, five in Virginia, two in Missouri, and one in Kentucky, according to state officials contacted by AFP.

"Oh my God, our town is in pieces," said Tim Holt, a clerk at a local hotel in Ringgold, Georgia. "We saw the funnel cloud coming and I ran into the bathroom with my wife and daughter. It's an 80 percent loss in our town." Violent twisters that famously rip through the U.S. south's "Tornado Alley" are formed when strong jet winds bringing upper-level storms from the north interact with very warm, humid air mass from the Gulf of Mexico.

The record for confirmed tornadoes over a 24-hour period is 148, set during the so-called "Super Outbreak" in 1974. More than 160 twisters were reported on Wednesday but not yet confirmed.

The tornado disaster is already the fifth worst on record in the United States and when the final toll is known it will likely only be surpassed by the giant Tri-State Tornado of March 1925, which left 747 people dead.