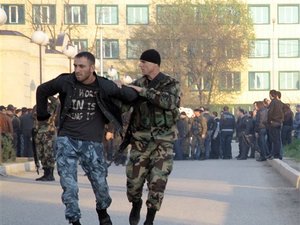 Several gunmen killed a policeman early Saturday in the largely Muslim region of Karachayevo-Cherkessia where an ancient church was also set on fire, officials said.

During a nighttime attack several assailants approached an off-duty policeman and shot at him in front of a bar in the Caucasus city of Cherkessk.

"He died of his wounds on the spot," spokesman for regional investigators Sergei Shuvayev told Agence France Presse.

Police detained several people and were now looking to establish whether they were behind the crime, he said, adding the motive remained unclear.

Attacks on government’s officials and police are nearly an every-day occurrence in the nearby regions of Dagestan, Ingushetia and Chechnya, a Caucasus province where Russia fought two wars against separatists in the 1990s.

The unrest fuelled by a Muslim insurgency has in recent years been spreading to other North Caucasus regions like Stavropol and Karachayevo-Cherkessia which until now have rarely seen the bloody attacks.

High crime rates in the Caucasus are also due to a general sense of lawlessness and impunity as well as the easy availability of guns.

In a separate pre-dawn incident, assailants set on fire an ancient church near the village of Kosta-Khetagurovo in the same region, a local police spokesman said.

As a result of arson, there was largely no structural damage to the church, which is perched on a rock outside the village and is built of stone, spokesman Kazim Baibanov told AFP.

The fire had however damaged the church's wooden floors, he said, adding the unidentified assailants had also broken the windows.

The Shaoninsky church dates back to the 10th century and is one of Russia's oldest houses of worship.

Baibanov said authorities were looking into the incident, declining to speculate who might be behind the attack.

Last November assailants set on fire two Christian Orthodox churches and one Baptist church in the region, all attacks coming in the space of a day, he said.